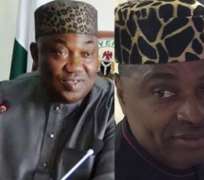 Recall that in a letter dated 23rd March, 2017, the Nollywood Actor/Politician, Kenneth Okonkwo, demanded that elections be conducted into the Local government Councils in Enugu, failure which he threatened to go to court.

However, recently, APC has been crying fowl over the attitudes of the Enugu State government towards the local government elections.

The Nollywood Actor, who is a prominent member of APC in the state, berated the state government over its plans to manipulate the elections in favour of PDP in the state. He articulated his views in a three-page letter to Governor Ifeanyi Ugwuanyi, dated 12th October, 2017, where he expressed lack of confidence in the process.