Finding Fela on AfriDocs on BET Africa in October! 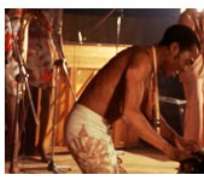 Its all about the music as AfriDocs celebrates the lives of Bob Marley and Fela Kuti amongst a host of music-focused documentaries. The month kicks off with Kevin MacDonald’s acclaimed documentary, Marley, that has become the definitive life story of the musician, revolutionary, and legend, from his early days to his rise to international super-stardom.

The unforgettable and un-paralleled life of Fela Kuti is the subject of Finding Fela; his life, his music, as well as his social and political importance. Fela created a new musical movement, Afrobeat, and used his music to express his revolutionary political opinions against the dictatorial Nigerian government of the 1970s and 1980s.

The film will be screened on BET Africa on what would have been Fela’s birthday, October 15th.

Finding Fela will also be available to stream ANYTIME and from any device on #AfriDocsAnytime, www.afridocs.net from October 22nd.

Last Song Before the War is the story of the world-famous Festival Au Desert, known as the world’s most remote music festival. The Festival came to a halt in 2012 after 12 years of unforgettable music when Tuareg rebels and militant extremists seized control of Northern Mali. The film chronicles the 2011 Festival — arguably the last edition that captured its original goals — a global display of peace, reconciliation, and the healing power of music.

The month ends with Hell of a Job, in honour of former ANC Deputy President Oliver Tambo on what would have been his birthday on October 27th. The film tells the story of his escape into exile and on what would become a 30-year journey to engage the world in the struggle to bring democracy to South Africa.

Catch AfriDocs on BET Africa (DSTV channel 129) every Sunday at 10pm, and if you miss any of these films make sure to get them on Catch-Up on #AfriDocsAnytime, www.afridocs.net . AfriDocs Anytime brings you some of Africa’s best documentaries to stream for FREE from any device.

Bob Marley’s universal appeal, impact on music history and role as a social and political prophet is both unique and unparalleled. The definitive life story of the musician, revolutionary, and legend, from his early days to his rise to international super-stardom.

The story of the most remote music festival in the world, Festival Au Desert, and the battle to make it happen. Two hours from Timbuktu, staged since 2000 at the Essakane oasis, the festival was a symbol of peace between the Tuareg nomads and the Malinese - until Islamic militants and Tuareg rebels ban music and silence the festival.

Finding Fela tells the story of Fela Anikulapo Kuti’s life, his music, his social and political importance. He created a new musical movement, Afrobeat, using that forum to express his revolutionary political opinions against the dictatorial Nigerian government of the 1970s and 1980s. His influence helped bring a change towards democracy in Nigeria and promoted Pan Africanist politics to the world. The power and potency of Fela’s message is completely relevant today and is expressed in the political movements of oppressed people who embrace Fela’s music and message in their struggle for freedom. Finding Fela was directed by the Academy Award winning director Alex Gibney.

Future Sound of Mzansi explores the past, present and future of South Africa’s electronic music scene and the multitude of sub-genres that lie within it. The film includes a colorful cast of characters such as Black Coffee, Okmalumkoolkat, Culoe De Song, the owners of Cape Town record label African Dope, and broken beats originators NakedBoys, among many others.

29 October
Hell of a Job | Connie Field | South Africa | 2010 | 52mi ANC Deputy President Oliver Tambo escapes into exile and embarks on what wouldl become a 30-year journey to engage the world in the struggle to bring democracy to South Africa. He first finds allies in the newly independent countries of Africa, and with their collective strength behind him, he approaches the U.N. for support, insisting that the apartheid government can be forced to the negotiating table if the Security Council will sanction and isolate the regime. But the western powers refuse to act, forcing Tambo to search for new support .