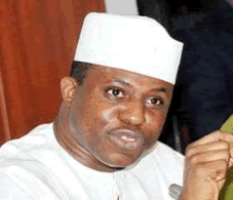 Bankole
The enmity between Speaker Dimeji Bankole and Hon Independence Ogunewe blew into the open yesterday. It took the prompt intervention of the Minority Leader, Ali Ndume, his deputy, Hon Suleiman Kawu and Hon Kadijat Abba Ibrahim to restrain the duo from exchanging blows.

Venue was the entrance into the hallowed chamber of the House of Representatives, when the Speaker was returning to the Chamber after hosting agitators for the creation of Aba State from the present Abia State.

Bankole had earlier in the day locked himself up with chairmen of all standing committees and their deputies in one of the Hearing Rooms to deliberate on ways to end the bickering rocking the House over sundry issues arising from the collapse of the capital votes and the proposed cut in the 2010 budget.

The animosity between the Speaker and Ogunewe dated back to the two week suspension slammed on Ogunewe over his roles in the allegation of fraud in the purchase of 280 Peugeot cars by the House leadership for N2.3billion.

Apart from his suspension, Ogunewe, who led the Transparency Group, which spearheaded the probe of the purchase was dropped as chairman of the Committee on Cooperation and Integration in Africa, as well as membership of other committees. Trouble ensued as the Speaker was making his way back to preside over the voting on the Electoral Act when he sighted Ogunewe.

According to an eyewitness who pleaded anonymity, the Speaker was moving towards Ogunnewe to exchange pleasantries when Ogunewe asked the Speaker to stop blackmailing him as had not done anything wrong.

Mr Speaker, why are you blackmailing me, what have I done to you?,' Ogunewe was said to have shouted.

The Speaker replied him that he had been to his House, but met only his wife.

Ogunewe, who was apparently not impressed replied: 'And what, if you meet my wife?' He hissed and said 'what is this mad man saying.'

Incensed by the reaction of Ogunewe, Bankole made a u-turn and charged at him with clenched fist, apparently to deliver a deadly blow on Ogunewe, but he was held back by Ndume, Kadijat and Kawu, while the staff of the Sergeant-at-Arms and his police orderlies formed a wall of defence.

As he was pulled back into the chamber, he quickly signalled for the clearance of the gallery for an executive session, which lasted for One hour, forty five minutes.

It was gathered that the open clash with the Speaker was reported to the House and some members, who witnessed it moved for an immediate suspension of Ogunewe, but was countered by some members, who argued that the embattled member should be given the chance to defend himself.

'At this point, the House became rowdy as members took different positions. While some were shouting on top of their voice to allow Ogunewe speak, some were calling for his immediate suspension for bringing the office of the Speaker to ridicule,' a member who did not want his name in print said. According to him, three members were allowed to give an account of what they saw before Ogunewe was given the floor to state his own side of the story.

At the end, Ogunewe was asked to apologise to the Speaker and the House, which he did in the spirit of reconciliation. Members of the South East caucus in the Houser, led by Emeka Ihejioha, the Chief whip were also said to have apologised on Ogunewe's behalf. A source said the South East members told Ogunewe that it would be the last they would beg on his behalf for a misconduct.

Bankole had earlier in the day held a two-hour meeting with chairmen and deputy chairmen of House Committees during which sources at the meeting said the Speaker begged them to allow peace reign with a promised not to reshuffle the committee leadership as being speculated.

The meeting it was gathered, also discussed the issue of members quarterly allowance and the need to settle the crisis between Bankole and Ogunewe who has been consistent in opposing the leadership style of the Speaker.

As at the time of filing this report, four meetings were going on simultaneously in different locations within the new wing of the House of Representatives.