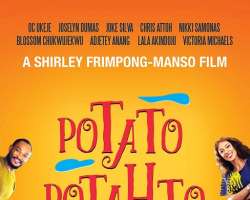 After receiving rave reviews at the Durban International Film Festival, Shirley Frimpong-Manso’s ‘Potato Potahto’ is set to premiere at the British Urban Film Festival on the 9th of September by 6pm, at the BT Tower in London. The romantic comedy was first screened at the prestigious Cannes Film festival in France, earlier in May.

Described by South Africa’s City press as “the hottest ticket in town”, the beautifully executed romantic comedy will be premiered alongside the Hollywood documentary ‘Stay Woke’, Irish movie ‘Deidre’ and South African film ’Cream’ at the leading film festival for diversity.

Award-winning director Shirley Frimpong-Manso who wrote and directed the movie said she decided to make a movie on divorce because the theme hasn't been explored in Africa. She said, “Divorce is a difficult process and I hoped to write a story that reflects the difficulties in a fun and unusual way.”

Potato Potahto which features a remarkable cast including OC Ukeje, Joselyn Dumas, Ajoke Silva, Lala Akindoju, Nikki Samonas, Chris Attoh, Blossom Chukwujekwu and others, is a fantastic showcase of how international co-operation, talent and creativity can combine to give a wonderful and universally attractive film experience.

The comedy of errors tells a story of a divorced couple who decide co-habit on equal terms in their former matrimonial home but soon come to the realisation that the ingenious idea is easier said than done.

The 2017 edition of The British Urban Film Festival will take place from September 6th to 12th.