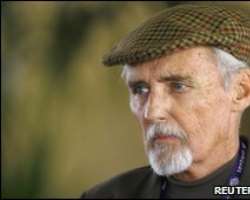 Hollywood actor Dennis Hopper has died at the age of 74 following a battle with prostate cancer.

Known for such cult classics as Easy Rider, Apocalypse Now and Blue Velvet, Hopper embodied the image of the Hollywood icon.

Hopper died on Saturday morning surrounded by friends and family at his home in Venice, California.

He was last seen in public in March when he was honoured with a star on Hollywood's Walk of Fame.

“Dennis Hopper died this morning at 8:15 am from complications of metastasised prostate cancer. He died at home in Venice surrounded by family and friends,” manager Sam Maydew said in a statement.

Hopper directed the 1969 counter-culture road movie Easy Rider, which he co-wrote with and starred alongside Peter Fonda. The pair were nominated for a best screenplay Academy Award.

“Dennis introduced me to the world of Pop Art and 'lost' films. We rode the highways of America and changed the way movies were made in Hollywood. I was blessed by his passion and friendship,” Fonda told the TMZ website following Hopper's death.

Following a promising start to his career, with a role in James Dean's Rebel Without a Cause, Hopper developed a reputation as a hell-raiser with a penchant for drink and drugs.

Following his success with Easy Rider, and the disastrous The Last Movie, his on-set clashes with directors and fellow actors saw him effectively blacklisted by Hollywood.

It took nearly 10 years for Hopper to win back starring roles, with his critically acclaimed role in David Lynch's Blue Velvet marking a turning point in his career, although his personal life remained turbulent.

Wed five times, his final marriage, to Victoria Duffy, turned into an acrimonious split in 2010 when she accused his family of trying to cut her out of his life.

In April a judge ruled that Duffy, who shared a young daughter with Hopper, could remain at the marital home.

It was during the court hearings that it was revealed Hopper was terminally ill with prostate cancer, following his diagnosis last year.