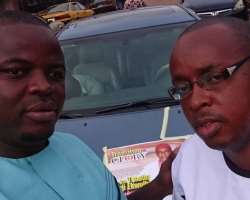 Nollywood producer, Ikenna Donald Ekwuibe, has already began the burial arrangement of his late father, Ozo Timothy Udeji Ekwuibe, who passed on 8th July, 2017 after a brief illness at the age of 60.

His body has already been laid to rest after his body left the Eastern Nigeria medical Mortuary for his compound in Enugu.

May his gentle soul rest in perfect peace.