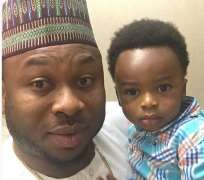 Ex-hubby to Nollywood actress, Tonto Dikeh, Olakunle Churchill, has decided not to feel for not having the latest pictures of his son, King Andre.

The business executive had to make use of the old picture he took with his son to celebrate the role he played in his life the times they spent together.

He wrote this message for his son, “Happy Father's Day to all the dads out there. Grow and shine Son #kingandre .”

While his fans came appreciating him for not neglecting his son despite the issues he is having with his wife, a fan called his attention to note that the dy is supposed to be celebrated with men having a good home and stable home.

According to the fan, “Kennethemeka: Fathers day celebration should be for men living peacefully with their wives.”