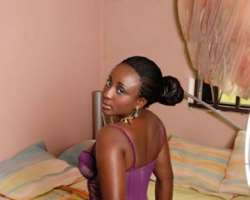 I'm still trying to understand the reason for this film. The story is about a group of girls who date only white men. It sounds like a thought someone got from eavesdropping a drunken conversation in a bar and must have heard words like: 'Some Nigerian women are 'forming' big babes and they only date white men' or something like that. Then the bells go off that there must be a story there somewhere without taking the time to think of a plausible plot. I shouldn't say there's no plot.

The basic story plot is for Ini Edo and Mercy Johnson to appear in tarty clothes with Ini almost topless and Mercy needlessly wearing clothes at least one size smaller, all in a bid to show off her curves. She does have beautiful curves but anything can be made to look tarty when people try too hard, especially if those people's tastes are questionable.

I also can't understand the kind of people the film passes off as 'white' men.

My brother-in-law, CCN (who is very fair in complexion) is a better looking 'white man' than those bronzed men from God-knows-where. And even though CCN is an award winning engineer with an oil company, I can bet my utara and ofe ndi'ulo he can act better than those sluggish, funny looking male specimen (I don't like calling people ugly).

With films like White Hunters, is it any wonder Nollywood is where it is today? If White Hunters is the best Nollywood can produce, I see a booming pornographic arm of Nollywood in no time.

Just in case you're still interested in the rest of the story, (Ini) changes white men like lipstick and even gets married to two at the same time. In one scene she goes to the market and her husband supposedly French but sounding like the 'mumu/mugu' version of whatever country is carrying their shopping basket on his head. This is a supposedly very rich 'white' man?

Her friends – Mercy and Funke – are dying to be introduced to their own white men but no luck. They try on their own but only end up with garlic loving Indian and dog loving white men.

It actually makes for very funny comedy especially the Indian bit. I have an Indian flatmate, so I know it's exaggeration with no thoughts for diplomacy at all.

Halima Abubakar is the village returnee who has not yet 'opened eye'. No one notices her excellent diction and manners and that she speaks too well for someone who dropped out of secondary school to return to the village. Funke Akindele is the star of this film as far as I'm concerned.