My Ankara Outfit Was a Birthday Gift…Mercy Aigbe 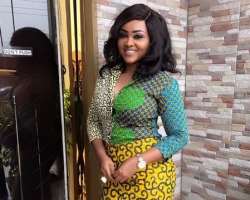 Hmm, Nollywood actress, Mercy Aigbe-Gentry, has been enjoying the beautiful life of a celebrity and recently she was celebrated in the odd way after her name was dragged in the mud by a fashion designer.

The actress was called in public after it was alleged that an Ankara outfit which she rocked for an event was actually given to her to model but she refused to give credit to the right designer and was not ready to return the clothe.

Well, after reading several damaging stories on the issue, she has decided to speak as she emphasized that she has no business with the said designer accusing her wrongly and the outfit was a gift from one Jumoke Odetola.

In her words, “Goodmorning Fam!..... my attention has been drawn to a particular story trending, regarding this shirt, please I will like to state categorically that I don't know the said designer, I never agreed to tag her and she didn't give me the shirt. The shirt was given to me by Jumoke Odetola as a birthday gift and when she dropped the shirt at my office, she never mentioned the designer and didn't tell me to tag anyone. .........thank you all and have a blessed day.”