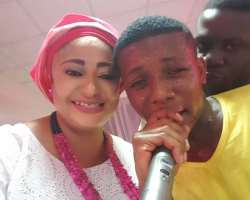 Man shall not live by bread alone and that is what Nollywood actress, Ronke Oshodi, has been up to as she does not just rely on acting alone.

The actress has added event compere to her resume and she has been doing it and smiling to the bank just like she did recently before stepping on stage to anchor a wedding which took place over the weekend.

Over the weekend, she was all shades of beauty as she stepped out for a wedding which also had the like of National Union of Road Transport workers in attendance along with singer, Chidinma.

You will give it to her that she is one of those active and hard working actress in the industry who has done well for herself as she also ensures that her home front is intact while she and her hubby both hustle and still keep the love alive.