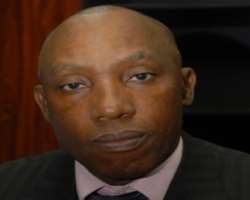 ABUJA, May 17, (THEWILL) - Engineer Austen Olusegun Oniwon was on Monday announced as the new Group Managing Director of the Nigerian National Petroleum Corporation, NNPC. Engr. Oniwon takes over from Mallam Shehu Ladan who has been nominated Kaduna state deputy Governor.
Until his appointment Oniwon was the Group Executive Director (GED) Refining and Petro-chemicals and also the most senior GED.

Born on 1st April, 1951, Oniwon is an indigene of Okene in Kogi State, North Central Nigeria. He started his working career with the NNPC in 1977 and rose to become Head, Planning of the Warri Refining and Petrochemicals Company in 1987. From 1988 to 1991 he was the Technical Assistant to the GED, Downstream and later Head, Engineering and Technical Services Department (ETSD) of Kaduna Refining and Petrochemicals Company from 1991-1992. That same year Oniwon was made Head, New Business Development, Corporate Planning and Development Division a post he held until his appointment as Head, ETSD at the Port Harcourt Refinery from 1993-1999.

From 1999-2000 Oniwon held forte as General Manager, Information System, Engineering and Technology Directorate before moving on to function as Senior Technical Assistant to the GMD and GM, Information Systems Department at the GMD's office. Months later he was made the Managing Director of the Pipelines and Products Marketing Company, a subsidiary of the NNPC before moving on to the Eleme Petrochemicals Company Limited as MD between 2003- 2009.

In a related development, Mr. Michael Ogiaghome is now President Goodluck Jonathan's Chief of Staff while Mallam Hassan Tukur becomes the new Principal Secretary to the president. The president's spokesman Mr. Ima Niboro was also elevated to the position of a Special Adviser.