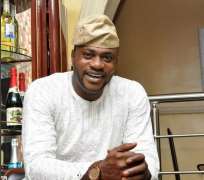 Nollywood actor, Odunlade Adekola, is currently on another movie set where he is not playing his usual comic roles where he uses abusive words but this time, it is a touching movie that will make viewers cry but learn.

The actor is currently on the set the movie titled ‘AGATHA’ which is being produced by actor, Segun Onogungbe, who also dabbles as the director also has, actress Eniola Ajao and many others featured in it.

Checkout some behind the scenes shots of what to expect in the main movie once it’s out.