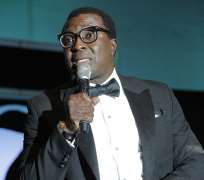 Seasoned comedian Alibaba has expressed his espousement for youthful entrepreneurship at the recently concluded ‘January 1st Concert’ which held on the 1st of January, 2017 at EKO Hotel Convention Centre, Victoria Island, Lagos.

During a segment of the concert tagged "A Stitch in time contest" Alibaba called on stage; a few fashion designers from the audience, who will compete to win a brand new sewing machine worth N100, 000 and N300, 000 reward.

Given three hours to sew and complete their designs from scratch; the selected few went on to pick volunteers from the audience so as to model for them.

After three hours, the designers ascended the stage with their models respectively and a winner was decided by the mammoth audience and judges, which included Uche Nnaji and Mai Atafo.

Alibaba went on to emphasize on the need for Nigerian youths to dabble into an array of crafts as skill acquisition is one of the keys to stay afloat, especially in these trying times.