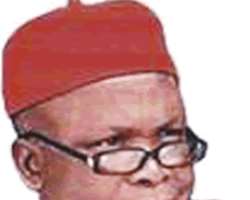 Elechi
Ebonyi State could be described as a state where politicians are docile and only wait to take advantage of an already prepared 'dish' and even consume more than the provider. As a result, the 2011 general elections in the state is one that is unpredictable, consequent upon the party and the man at the helms of affairs; PDP, and Gov. Martin Elechi.

All other political parties and politicians have queued behind him as it has become obvious that PDP will be the party to beat in the state. The governor has received the endorsement of the party executives to fly the flag of the party and the massive support of the people.

He has no reason to worry, rather he is consolidating to avoid the hawks within the party pulling the rug off his feet to disorganize his ambition. The question is, how strong is the position within and outside the party both in structure and finance realizing that the state is mostly made up of politicians who have taken politics as business.

There are other politicians in the ruling party hiding underthe cover of other political parties waiting in the wings to seize any opportunity that might come their way to fly the flag of such parties that might give them the chance.

Ironically there is no doubt that they truly feed on the government as they have become a stooge of PDP to give the impression that there is opposition in the state.

Only the former governor of old Abia state Dr. Ogbonnaya Onu of the All Nigeria Peoples Party (ANPP) can make some impact. He may not have the necessary fund and his structure might have collapsed as, he is suspected to have run out of cash to maintain it. He is a man that can truly challenge the PDP candidate.

Onu has refused to make any political impact as he has refused to organize or attend any political gathering in the state of recent. In as much as PPA is showing strong presence in the state, there has not been any known politician in the party that can upstage PDP. Even when those showing signs of identifying with the party have not openly declared their intentions, they believe in behind the scene politicking. Among such politicians is Senator Julius Ucha representing Ebonyi Central at the Senate who could have given the governor the needed challenge but is handicapped, as his ambition to contest on the platform of PDP is foreclosed with the automatic ticket being bandied by the party for the incumbent governor.

However, notwithstanding the pretences of the party going to the primaries to pick their candidate the Ezza/Ezillo crises has added to dent the political career of the senator as he is seen as the sponsor of the militants. And he is in a hurry to become the governor of the state come 2011 without which, it would take his zone another 20 years to be considered for the position due to the zoning formula of the party.

The senator could have been the incumbent governor of the state. But for the last minute power show from above, which changed the equation that angered his teaming supporters. He has not relented to achieve his life ambition while Gov Elechi who is from the same zone with Ucha has been desperate to keep the mandate for the next four years despite mounted opposition that is designed to deny him that opportunity.

Though Ucha has the resources and the structure to wrestle power from the governor, the political platform on which he could do that may be his undoing. He has shown signs of achieving his ambition under the Peoples Progressive Alliance (PPA), with the massive support of those that were marginalized in the ruling party. These people are seen as a parallel faction within the PDP today. And this faction is seriously making moves to undermine all efforts of the incumbent governor to secure the endorsement of PDP even when they insist that the election of its standardbearer for 2011 should be by party primaries to be conducted.

While people believe that Elechi should complete his tenure because of his infrastructural development devoid of human empowerment, it is the opinion of the average Ebonyi person that he has not done enough to warrant his second coming having ignored the foundation and history of the state creation even when he claims to be a founding father. Aside the fraction of the opposing views within the party, PDP has its eyes to return Elechi as its candidate in 2011 elections.

The fear of the unknown both in PDP and other parties has made politicians not to show any serious commitment to contest for governorship ticket in the state as nobody has indicated for the position probably not to incur the wrath of the governor. The game is not however over as it is yet to mature, with under ground maneuvering and manipulations from even prominent politicians in the state.

Parties could spring last minute surprises with a wining candidate that may fall back on the weaknesses of those candidates, which political pundits are looking upon to make an impact in the political terrain of Ebonyi State. The influence of such people like the former Governor, Dr. Sam Egwu should not be over looked, as it is suspected that the former Minister of Education is strategizing for 2011 elections with his adopted political sons and daughters in the state and Abuja politicians.

However the forthcoming local government election in the state has become an eye opener where some prominent politicians who had the impression that the PDP would adhere to agreed settlement are now licking their wounds because their favoured candidates have been rigged out, especially in Ohaozara and Ivo local government areas where the party chairman Engr. Dave Umahi and former senate president Chief Anyim Pius Anyim hold sway, through the manipulation of the party machinery. Even with the donation of N10 million by Anyim, probably made to cement his renewed relationship with Gov. Elechi's administration and possibly give his candidate the ticket, unfortunately his favoured candidate could not get the nod of the party.

And in Ohaozara, the local government of the party chairman, Umahi who at the distribution of election materials for the party primaries lamented that his area could only produce a candidate. It is on record that the incumbent local government chairman paid N2.5 million to purchase form but was denied presentation for the primary. He was rigged out.

Not only were there intrigues within the ruling party, other parties have cried out over the manipulation of the state electoral body which has imposed N25, 000.00 as fee for chairmanship candidates seen as a deliberate ploy by the government to make it impossible for other candidates outside PDP.