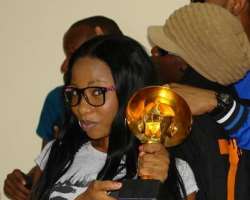 It is just about two weeks to the most prestigious music awards in Nigeria, and there is no doubt that all is now set for the fifth edition of the Hiphopworld awards

Year in year out, since inception, it has always been different stories, testimonies and demonstration. Known for daring to achieve the seemly impossible, Hiphopworld has over the years experimented with concepts that have eventually helped in highlighting the power of possibilities.

This year, the organizers of the awards embarked on a media tour from May 3, 2010 with select nominees. “It is just our way of saying thank you to the media for their support since inception, without them, the journey thus far could not have been easy. We know the impact of the media on this project, and we are extremely grateful to them for their immense support” Executive Producer Ayo Animashaun told news men last week.

Representing Next Rated category was Mocheddah, Skuki, General Pype, Jesse Jagz and the Prince. Omawumi, Ill Bliss and Djinee visited Punch on behalf of the “Revelation of the year” category.

“It is just a feel good thing, where nominees come to battle, solicit for votes as well as mingle” Animashaun offers.

This year's awards is scheduled to hold on May 29, 2010 at the Eko Exhibition hall from 6pm. Tagged Power, Prestige and Pride, nominees, artistes, invitees and special guest will be treated to a yellow carpet reception from 6pm after which the event will kick off.