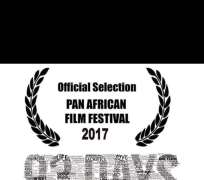 PAFF is a non-profit corporation dedicated to the promotion of cultural understanding among peoples of African decent. Every February, PAFF screens the best of Films and Arts from within the U.S. and all over the world throughout the African Diaspora and it’s no surprise 93 Days was selected.

The movie reminds the citizens of Nigeria of the fight and victory won against the deadly Ebola virus disease that plagued the country in 2014.