The misrepresentation of Ifa in Nigerian films----Elebuibon 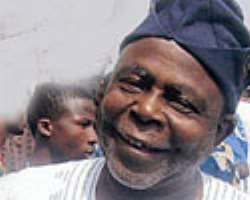 Lovers of Nigerian films will be familiar with this trend: a man or a woman who wants to harm his/her neighbour goes to Ifa priest for help. He/she is given a charm and the evil intention most likely succeeds. The victim suffers for a while and then a Christian pastor or Islamic cleric is invited to pray for him/her.

The victim is delivered and everybody goes home rejoicing. For good effect, the 'Babalawo' who carries out the evil is sent some spiritual missiles when prayers or a Bible/Quran is hauled in his direction. He slumps, dies and the power of light which Christianity/Islam represents is seen as having triumphed over darkness and evil which the African traditional religion is seen as representing.

It doesn't happen the other way round - a Babalawo untying the knot that Christianity/Islam has tied.

Over the years, this mode of thinking has cultivated a stereotype in Nigerian films. However, practitioners of African traditional religion are not taking matters in their stride anymore. In their own little way, they are set to contend with the insidious stereotypes that have been built about the African traditional religion by practitioners of the more dominant religions.

Babalawos who feature in films are already towing this path. One of them is Chief Ifayemi Elebuibon, the popular Ifa artist who also produces the TV drama on the Ifa corpus, Ifa Olokun Asorodayo. Elebuibon is one of the most visible Ifa practitioners and artists in Nigeria and beyond. He has taken the Ifa culture to many countries and also tried to disabuse people's minds about Ifa and African traditional religion.

He blames the misrepresentation of Ifa in Nigerian films on ignorance.

”They do not know the difference between 'Babalawo', 'Onisegun' and 'Oloogun Ika'. The Babalawo is one that is rightly positioned in Ifa Olokun Asorodayo to solve the problems of the world. He is to repair issues about people's lives and make the world better. Rather, they make films in which they muddle everything together.”

Another of these Babalawos is Peter Fatomilola. He is a lecturer, actor, writer, producer and director of several films. He has been into the Ifa practice since the age of six and was initiated into the Ifa scared groove, Igbodu, at 18. He says his acting talent was discovered by Prof. Ola Rotimi when the latter returned from the US sometime in 1967. Like Elebuibon, he blames the misrepresentation of Babalawos on ignorance.

”People see someone with leaves in hand or chanting incantations and quickly conclude that he is a Babalawo. A Babalawo is to African traditional religion, what the Pastor and Imam is to the church and mosque respectively. As the Bible and Quran are books of knowledge, so is Ifa. They mix things up and think that Onisegun (herbalists), Oso(wizards) and so on are all Babalawos. Onisegun deal with roots and herbs and he can decide to use it for good or evil purposes. Babalawos too learn about roots and herbs but that is because from time to time, Ifa might recommend a solution that they will not necessarily refer to Onisegun.”

Fatomilola has starred in films like SekeSeke, Rere Run, Afonja, Saworo Ide etc. He has close to 500 films to his credit.

Much younger but not in any way to be disregarded in the Ifa practice is Fakolade Ajanaku. He was born into a family that practices Ifa and he seems well versed in the Odu corpus. Ajanaku responds to enquiries from our correspondent with first, a verse of Odu Ifa before going into details. He attributes his going into films to watching Elebuibon on TV while growing up.

Getting into films, however, was not because of his Ifa knowledge. He told his father he wanted to be an actor and he was registered into a film company. He believes he has paid his dues and is today a film producer. He has starred in several films such as Bolode Oku, Ase n tedumare, Odun baku etc. He acts other roles but due to his knowledge of Ifa, he tends to be favoured when a choice needs to be made for the role of Babalawo. For instance is Ase n tedumare which he wrote and also featured as Babalawo.

On the portrayal of Babalawos in Nollywood films, he attributes the misrepresentation to mischief.

”What belongs to them means nothing, but it is what others show them that attract them. Ifa divination was performed for the fish who sought the friendship of the hook,” he said, chanting a verse from Odu Ifa to buttress his point. ”Such is the relationship between Africans and foreign religions. Why do they choose to show only the negative side of Babalawos because they want to put up their own religion?” he wondered.

As an actor, he admitted that he has been conned by filmmakers a few times when he was given only a portion of the script to study and act. While watching the whole film later, he saw that the rest of the story didn't portray Babalawos in good light. For that reason, he has sworn that he would never take up a role as a Babalawo without reading an entire film script.

Chanting Ifa verses in films do conjure up spiritual power, they all agree. Fakolade says that what he does is to stay at a very ordinary level where his chant would not cause harm. For someone so versed, he says, he does not use fake chants like others who do not know about Ifa but act as Babalawo all the same.

Fatomilola also uses authentic Ifa Odus in films because, according to him, there are millions of people out there who are very knowledgeable about Ifa and can tell immediately if the chant is fake - something that is capable of detracting from the integrity of the film.

He says that for a Babalawo like him, chanting Ifa verses do conjure up power in the spiritual realm. He says he feels his body moving spiritually when he is at it.

”Unless the person is not a Babalawo and is chanting what they wrote in the script for him. If you are one, you will feel it.”

”Even without putting out signboard,” Fatomilola says, ”people seek us because they have seen us in films and they know we are real Babalawos.”

Elebuibon lectures on Ifa in many universities abroad.

With the films they are making, they hope to disabuse the mind of the audience about the roles of Babalawo in the society and also help them to be rightly positioned in a modern society.

Elebuibon whose studio was gutted by fire sometime last year says that the place is being put together again. By October, he will be releasing two films he is producing in conjunction with some friends and institutions in Philadelphia, United States. They are titled Elegbara and Esentaye. Both are to espouse the values of Ifa and the roles of Babalawos.

”Esentaye will tell the story of how knowing a child's destiny from birth will guide his/her choice in life.”

He appears not bothered about the negative things being said about Ifa and Bablawaos in Nollywood.

”People have written a lot about it. Orisha World Congress has done a lot in that but some people will just never change their minds.”