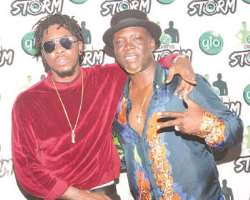 By Tofarati Ige
Globacom's pulsating music concert, Glo  Campus Storm, lived up to its billing as the best entertainment spectacle on campus as the University of Port Harcourt last weekend hosted the first edition of the new season of the show.

Up and coming acts, Timaya, MI, Runtown and popular comedian, Gordons, who anchored the show, all ensured it was a showpiece the university community will not forget for a long time to come.

Runtown was the first major act to perform after up and coming musicians in the school. He   proved why he is one of the hottest acts in the country at the moment and sent the audience singing and dancing to his   tracks including “Lagos to Kampala”.

Rap sensation, MI, was next, as he reeled out his very popular tracks. He ended his very energetic performance with his monster song, “Africa Rapper No 1”. This charged up the hall and several of the students ran on to the stage to hug him and take “selfies” with him.

Homeboy, Timaya, finally brought the roof down with a earthshaking display. The students reciprocating in equal measure, roaring and cheering on their feet.

Gordons laced the show intermittently with humourous jokes, while high-rising female DJ, Lambo, complemented the artistes' performances with hit songs from her jukebox.

All the 10 winners will later join 230 others to be selected from the remaining 23 institutions where the show will hold to vie for the star prize of N1milliom each in the male and female categories at the grand finale.