My love for Clinton, and why I dedicated award to her— I Go Dye 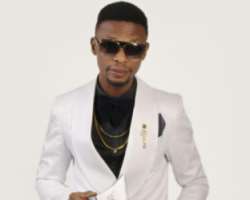 By Ayo Onikoyi
Hotshot ace comedian, Fracis Agoda, known simply as I Go Dye, has dedicated his latest award, United Nations World Habitat Ambassador award to the US Democratic presidential candidate, Hillary Clinton, citing a number of reasons why the former Secretary of State has won his heart.

To the humour merchant, the woman embodies values he believes every woman should aspire to attain.

“I dedicated the award to Secretary Hillary Clinton, one, because she's a fundamental advocate of peace and mother   in thoughts and in   actions. When her husband was passing through difficult times, she was standing there like a true friend. Today, she is a   mentor to women all over the world, bridging the gap of gender inequality; inspiring women to self-believe and greatness.

“Her continuous advocacy for peace, is a reminder to us, to sacrifice all within our reach to achieve peace; affirming the fact that without peace, humanity will be in bondage. Indeed, women are the greatest victims of all conflicts, they become widows, lose their sons in wars and they are raped and traumatised for the most part of their lives. Peace is priceless and the world's habitat can only be sustained when there is peace,” mused I Go Dye.

Speaking on her chances of defeating her biggest rival, the Republican candidate, Mr Donald Trump, I Go Dye minced no words in giving the race to Clinton, saying, “All the stats are there to see. Throughout the campaign the woman has shown sound traits of a true leader while her rival has only achieved the feat of being a hater who is against basic values on which America was founded.”