Miley Cyrus now with a man 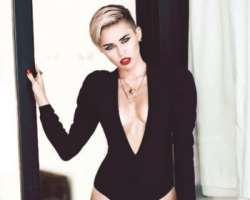 •Explains her first relationship was with a girl

The “Wrecking Ball” singer has opened up to Variety media about the first time she realized she was pansexual while visiting the Los Angeles LGBTQ center.

Recall that Pansexual humans are those who are attracted to any gender and also cannot identify to a gender themselves.

“I saw one human in particular that didn't identify as male or female,” she told the magazine. “Looking at them, they were both beautiful and sexy and tough, but vulnerable, feminine and masculine. And I related to that person more than I related to anyone in my life.”

Miley explained that although people may not see her as gender-neutral, she feels very neutral. Adding that the LGBTQ alphabet should continue forever, but a 'P' should be added.

The singer is now dating actor Liam Hemsworth, who she was engaged to before the pair split in 2013.

While she's now with a man, she explained her first relationship was with a girl.