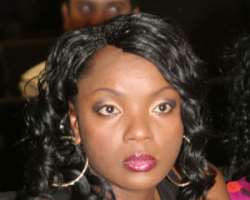 The Gulder Ultimate Search for celebrities was quite an experience for Chioma Chukwuka. It was an opportunity for her to show her fans and others who care to listen that she is no pushover. She still has a lot to offer as she reveals in this interview. Excerpts:

Why were you so unnecessarily vocal during GUS? You were so vocal. Was that deliberate?
It was deliberate. It was part of my strategy and it worked for me because everybody sees Chioma as quiet.

Everybody thinks Chioma cries and if you notice at the initial stage, I was trying to see if the “quiet” thing would work, but it didn't because that was the jungle and in the jungle, anything goes. So I had to switch to my initial plan and it worked for me. I did my job very well. It was a strategy and I will still stick to it anytime any day.

How did you know it worked for you?
When the opportunity came for me to be a part of the Gulder Ultimate Search, I was like yes, this is the platform for me to tell people that Chioma is not a stereotype of an actor. Chioma can do something different from what we are used to seeing. She cannot just cry, she can be hot, she can be fierce she can put it to your face and truthfully that is not just who I am, that is just what I do. My friends know me and I cannot change. I cannot change at my age and after all everybody has that point. Even in your home, you are defensive one moment and the next you are not. You cannot be defensive at all times but the substance that makes you will still be there. That is not the case with an actor. Our lives are different from what we do.

I was really surprised with what you did in the camp though I knew you are not totally “buti” but I was expecting at least a little of “effizy” from you as a Nollywood diva.

As I said earlier, we were in the jungle, so all the “effizy”; all the “feferity” were left at home. When we were trying to enter the camp, we left it at the entrance to pick it when we are going home. Why you didn't see that was because I had a strategy, I didn't want everybody to see me the way they see me everyday. You know a problem we have in Nollywood is to stereotype a person.

They actually write a script with you in mind. Okay there was this script I had and they forgot to write the character's name they just wrote my name there. You know that is just the height of stereotyping. I didn't want that, I just needed this platform to tell the world that okay Chioma needs to be out of this box. It doesn't change who I am and it doesn't change who I have been. It is just that I want you guys to see me in another light; it doesn't affect my person. GUS provided that platform and I grabbed it.

Is it true that while going in for GUS you said you were just going there for a day and you would leave but on getting there, you were extremely competitive you wanted to win? So did anything change your experience when you entered the house or you never planned to go in there just to pass time?

Like I said earlier, I went in with a strategy and if GUS was all about the task that we were given to do: everybody running, who got the flag, who came down the plank first and all that, a lot of people won't be watching and because of my strategy, because of the plan I went there with, I generated a lot of buzz for GUS and that is why a lot of people were glued to their TV sets just to watch and you will see, the remaining episodes after my eviction will be very boring. It was not a plan I had in camp, it was a plan I had to work for me like I told you. I just wanted to go in there to showcase myself as a different character so that people will know that Chioma can do something different from what they are used to.

Did you plan to win?
Everybody there planned to win. Those of us that were evicted were just unfortunate that we did not make it to the end, so that is it. There has to be a winner and there has to be a loser.

Did you feel disappointed?
I felt a little bit disappointed at the point when I was leaving. But as I speak, I feel very okay.

Looking at your face when you were leaving, I thought you wanted to make up with Muma Gee?
There was no quarrel, so there was no need to make up to anyone. Like I said earlier, it was my strategy, we were cool before the camp and we are cool outside the camp.

Have you gals spoken since?
We were not on speaking terms before the search, so, I don't understand.

Do you have a cordial relationship with Emeka?
Of course, as a colleague, we have a working relationship

Do you think this will bring the 'ferocious' on the rooftop like the Muma Gee and Eucharia kind of role?
Well, yes. The roles have started coming; I don't think you are getting me. It is not that it will change my person; it's just to let people know that I can do this. The roles are coming and if it is within the confines of what I can do, I'll do it.

But has the platform GUS offered started 'working the magic'?
Yes. Everybody now knows that Chioma is not quiet, Chioma is not stereotyped. She can do something different.

How has life been for you? You are one of the few ones I know who doesn't 'keep friends'. You are one of the few who doesn't live where other Nollywood persons live.
That is what works for me. Let the Chioma that people know be the Chioma that people know and me and my family. Let me cherish that, because they are all I have. I can't share everything with people; I can't share my family with the public. They can let me have that, can't they? My life alone is enough to share with the world not to talk of my life and my family.

Has the strategy of separating your home from work been working for you; though it won't be fair to say it is only in Nollywood that marriages fail?
Truthfully, I believe my strategies didn't do that. It is God. When it comes to marriage, career and stuffs like that, there is no particular plan. I just feel it's God's favour. That is what I believe and things are working for me and I thank God for that.

How does it feel to be a mom?
It's wonderful. It is not an experience that you can share; it is better experienced. I thank God for my family and for everything He has deemed fit for me to have.

How do you juggle everything you do with Nollywood, and I learnt you still go to the market. How true is that?
(Chuckles) Of course, I have to go to the market. I have to cook for my people. How I juggle it? It has not been very easy, but I thank God for the kind of family I have. They are very understanding and they know my job can be very demanding. So, sometimes they have to let mummy go and come back. They miss me when I'm not around; they just hold on for me when I'm not around.

As a stakeholder and as an actor, what do you think is wrong with Nollywood?
What is happening to Nollywood is what is happening everywhere in the world. It is the social crisis we are experiencing: the recession. People thought it won't hit Nigeria, so when it did, it hit us very bad. Some people are acting as if it took them unawares, but we had been warned and it is affecting every part of the country.

Nollywood happens to be part of it; but it is not completely down. It is just that we are going back to retrace our steps and to find out where we missed it and to correct it, hoping that we will have a new Nollywood that will stay, that won't be moved, that won't crash in spite everything that is happening around the country.

When you look back at the years when you were not an actor and now, what comes to your mind?
I have been in the industry for ten years and looking back, first of all I will say I have no regrets. I love the peace I've had, I love the growth I've had and I love my consistency. Basically, it was not easy at the beginning because I didn't have any godfather or anybody that will say let me get this for you, let me get that for you. But on my own and definitely with God by my side, I got to where I am today. It's been challenging but it's worth it. I paid my dues and you can't say you've stopped paying your dues.