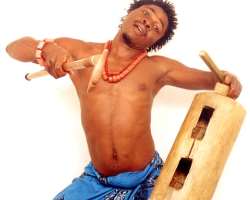 CALL him Osakuni Sunday and you will be surprised that not many Nigerians will be acquainted with the name. But call him Original Stereoman – Ekwe, he does not need any further introduction. That was the tight spot the talented ragamuffin musician, found himself recently in Holland.

He was in Hague as one of the participants at the just-ended Niger-Delta Peace Consolidation Conference organized by the Hope for Niger-Delta Campaign (HNDC), where he entertained the mixed audience to his kind of music. Saturday Celebrity engaged him after the three -star performance concerning and the origin of the ekwe – sample, his love for women, dread locks and more.

It's a surprise meeting you in the Netherlands. What brought you here?

I 'm in Hague for a programme organized by the Hope for Niger-Delta Campaign (HNDC) on consolidation of peace in the Niger-Delta. I thank God for the way the programme went.

I thought you were a musician, and not a Niger-Delta activist.

What are you taking back home after the conference?

I think I'm going home with a positive result because I believe we have achieved everything that we came here to do. I will go home to tell the people what happened here.

What do you think the government of Nigeria should borrow from the Netherlands knowing that the country shares the same topography that dot the Niger-Delta region?

Niger-Delta is my mother land and the international headquarters of Shell is situated in Netherlands. What I think the Government of Nigeria should do is to translate the good things they have seen here into reality in our country. If you remember, during the conference, the whole arguments centered around the lack of development in the Niger-Delta.

Government officials have been visiting Netherlands time without number, so they cannot claim ignorance of the fact that Netherlands was reclaimed from the water; so was the Niger-Delta region. We just claim to be the giant of Africa but yet we don't learn anything.

How can we say we are learning or that we are the giant of Africa when we don't bring good things back home for our people. Comparing Nigeria 's problem with Europe's amounts to making a mistake, because our leaders travel outside the country on regular basis and see these things for themselves. They return home without doing anything to improve the quality of lives in this country.

You can see that the Niger-Delta is one of the poorest regions in the world, people who manage to own cars among them cannot even drive their vehicles to their villages because there is no access road. We need a quick change of things.

You were half nude when you were performing on stage. Why did you appear like that?

It's how I dress. In the area where I come from, we believe in our tradition. We tie wrappers, wear beads around our necks and sometimes, we put on singlets. That is how we do it.

I try to bring an African lifestyle into it. My kind of music is ragamuffin , but I present it in African style: something close to the culture of the place I come from. That is the reason I dress that way, and people appreciate my style.
Must ragamuffin musicians always wear dread locks?

It's not a must for every musician to wear dread locks. But it's just that dread locks bring out the African-ness in a person. You know we didn't have combs in those days to comb our hair. And when you don't have a comb, how does anyone expect your hair to be, punk or layers? It's my style. I chose to go this way.

You go by the nickname

Sample-Ekwe. Ekwe is an Igbo name for the gong. Are you an Igbo man?

Ekwe is a Nigerian word that is most popular in the Igbo area. I am from Delta State. We also call it (gong) ekwe. When you beat the gong, people must hear the sound. That is how sample came into it.

If you have a product, you sample it for people to know it first and foremost before they can patronize you. When I sample my ekwe, people hear the sound. That is why it is ekwe in the first instance.

Your dance steps appear to be original to you, how did you come about it?

Yes, I started with cultural dance, egwu-igba cultural group. I tried to merge them with the current dancing steps of ragamuffin with break-dance, which is why it's on its own. I included cultural dance and all that together, that is what makes it Angle 90 dance step and with my lyrics, what is you see is original stereo-man -style.

Women always flock around musicians. What is your experience with women?

I will say women and children are my major fans. Any musician that doesn't have women or children by his side is not a good musician – His music is not accepted. Children come around me a lot. I like women very well because my mother is a woman. But in terms of sleeping with women, I don't indulge that much. I'm married and I have a kid. So I want the best for my family.

Sometimes, I try to touch them but I don't bless them because eh… body no be firewood sometimes. But man need to hold himself. Not all that come are good for you. Some have come to destroy your star. Some are coming to make you what you are supposed to be. But, generally women and children are important in the entertainment industry.

So when is your next album hitting the market?

Right now, I'm working on my reloaded album that is going to come out soon but apart from that, I am working on my new album that is due to hit the airwave before October. Okpemu, agwo turu mbe turu okpokoro, is going to be the hit track and it means the snake that wants to swallow a tortoise is only swallowing an ordinary can, meaning that, you are swallowing something that has no meaning.

Am trying to do a gospel song in the album something like someone that is trying to destroy what God has created is destroying an ordinary thing because it will not work. Those are the kind of tracks in my new album. It is going to come out before the end of the year.