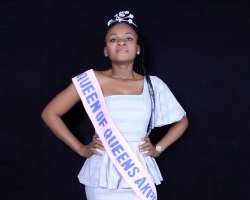 She is a native of Nung Ukim Ward 1, Ikono Local Government Area in Akwa Ibom State.

Few months ago, she was appointed as the Chair Lady of the Supreme Council of Kings and Queen (Akwa Ibom State Polytechnic Chapter) which means she is the Queen of Queens as she added that the position didn’t just come on a platter of Gold but by the special Grace of God almighty.

Having been emerged “Miss Science Technology Students Association (STESA) 2014/2015”, she added that Queenship has always been her calling and that the new position given to her as the Chair Lady of the Supreme Council of Kings and Queen (Akwa Ibom State Polytechnic Chapter) will challenge her to do more for the Institution and her Society at large as well as encouraging other youths to believe in themselves by shunning all forms of social vices and embracing the “Dakkada” Philosophy of the state Governor ; Mr Udom Emmanuel.

While operating as “Miss Science Technology Students Association (STESA) 2014/2015”, she visited the Motherless babies’ home and presented them relief materials to ease their livelihood.

Through her support and sponsorship, her Departmental Student week was a huge success.

She has collaborated with one of Raffia City Biggest Hotel Diamolen Luxury Hotel to produce “Face of Valentine” also known as “Miss Diamolen” 2016 through an event held at Diamolen Hotel on the 14 February, 2016.

She has also partnered with Raffia City Entertainment to produce the first “Miss Raffia City” 2015.

She is the first Akwa Ibom State Polytechnic Student to handle the position which she said she will be a role model as she will also be working hand-in-hand in partnership with the Government of Akwa Ibom State, Non-Governmental Organization, Companies, Cooperate Bodies and Individuals so as to minimize the high level of social vices among the youths such as Cultism, Lesbianism, and Prostitution.

While on a press interview with iktrend247, she has this to say about her new portfolio.

Stream or Download her Interview below!
Happy Listening!
https://soundcloud.com/cynthia-cynia-bae-ukpong/exclusive-interview-with-queen-nsikan