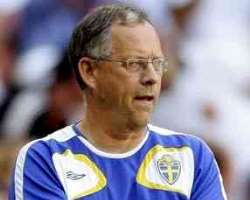 Lars Lagerback
Even without kicking a ball, the 44-man provisional list of the Super Eagles will be reduced to 30 on Monday by the manager of the team, Lars Lagerback.

This means 14 of the players will be dropped without a proper assessment of them and it is feared that the majority of the home-based players may be shown the door.

The Swede released the provisional list on April 18, listing six home-based players in the fold with some players who have been out of the fold for long staged a return.

After a meeting with his assistants, including Daniel Amokachi, Lagerback is expected to meet the chieftains of the Nigeria Football Federation Technical Committee headed by Chief Taiwo Ogunjobi.

The 30 players to be listed will still fight for places in the final cut of 23 to be released on June 1 for the World Cup finals.

Lagerback, who has led his country to the Round of 16 in the past two World Cup finals, will come out with the 30-man list at a news conference at the NFF secretariat in Abuja.

The 30 players will be treated to a send-off being planned by the NFF. President Goodluck Jonathan is expected to address the team on the need to do Nigeria proud at the World Cup.

The send-off will take place at the Congress Hall of the Transcorp Hilton Hotel, Abuja on May 20.

The 30 players will also be the ones to travel to London for a pre-World Cup camping, at the Five Lakes and Golf Country Club, Colchester Road, Tolleshunt Knights, Maidon, Essex from May 21, and play international friendlies against Saudi Arabia in Austria on May 25 and Colombia in London on May 30.

The players on the final list will play the last friendly match, against North Korea in South Africa on June 4.