Fix Problems, You Weren’t Elected To Agonise Over Past Govts – Kukah Tells Buhari 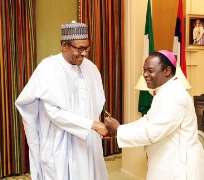 SAN FRANCISCO, September 15, (THEWILL) – The Catholic Bishop of Sokoto diocese, Rt. Rev'd Matthew Kukah, Wednesday told President Muhammadu Buhari that Nigerians did not vote him in to keep “complaining about the country's yesterday,” emphasizing that power was taken over by the Buhari administration to fix problems, “not agonise”.

He spoke at the Catholic Bishops Conference of Nigeria, CBCN, in Ondo state, same day that the Emir of Kano, Alhaji Muhammad Sanusi II called on the government of Buhari ‎to seek the advice of experts in tackling the current economic crisis.‎

Speaking at the Government House, Kano, during the traditional Sallah Durbar (Hawan Nasarawa), he explained that ‎consulting experts would help in enunciating ‎appropriate solutions to the crisis, and reduce the hardship of the people.

The former governor of the Central Bank of Nigeria, CBN, urged wealthy Nigerians to support the less-privileged in order to alleviate their sufferings.‎ ‎‎He asked Nigerians, irrespective of religious beliefs and political inclinations, to continue praying for economic growth and development of the country.‎

For Kukah, the war against corruption would have no effect if people have no food on their table. He added that the government is not fighting corruption, until it gets to the root cause of poverty and inequality in the society.

According to him, “Sending people to prison will only be useful if it puts bread on the table of people.”

“I still believe that unless we get to the root cause of poverty, inequality, which is really the evidence and symptom of corruption; you can talk of fighting corruption all the rest of your life, and very little is going to happen.”

“We didn't vote a government to complain about yesterday. If we wanted yesterday, the new government would not be there. It is really about taking responsibility. No matter how much you praise or abuse Jonathan, he is not the president of Nigeria.”

“I think that people must understand, you take power to solve problems, not to agonise.”

The activist bishop accused the government of not communicating effectively with its citizens on the state of the country.

He said, “This is why you increasingly have a situation which people are not willing to make sacrifices because they still believe that their obligation is to protect themselves.”

“I think unless government openly explains and engage people very constructively, what you are going to face is a situation which ordinary citizens are finding the best ways to protect and defend themselves.”

“All government needs to do is to think out, a bit more clearly, how it can engage ordinary Nigerians. It is not enough to tell people to get back to the farms; the issues are much more than that. It is not enough to say you have big plans for agriculture; it is developing very clear, short, medium and long term solutions to the present situation.”

“People are suffering from combination of both physical and psychological insecurities, and also, the very real threat that is poised by all kinds of agencies: the herdsmen, armed robbers, kidnappers and many more.”