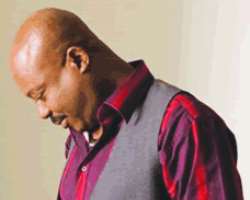 SCOTT
Jon Scott is not your typical singer-songwriter. You won't find this Nigerian-born and London-based Afro-soul optimist wearing busker chic, doing the usual circuit of open mics and toilet venues, or hanging about hopefully in Hoxton. Because Jon Scott took his parents very seriously when they packed him off to London as a wide-eyed teen to study for a proper career.

So seriously that, when he isn't writing, recording and performing his inspiring songs of love, peace and unity, running his own Brown Babes label, and being a proud father, he has a very proper job.

Jon Scott is probably the only music-obsessed singer-songwriter who owns his own law firm in the city of London.

'Music has always been the first thing,' Jon explains. 'The lawyer part… I just fell into it, basically. You're supposed to have a career and my parents invested a lot of time and effort into that. So, I compromised. But I never stopped gigging.'

So, after 20 years of living for music, the legal eagle decided to take his art as seriously as he could, and self-released his 2008 solo debut album, Some R Beautiful and the Balearic beats-influenced Summer 08 EP. And, having found a growing audience for his brand of mellow, feel good pop-soul, he got straight on with making album number two.

Boasting co-production from Gordon Hulbert, who has worked with Annie Lennox, Chaka Khan and Angie Stone, Flow Like A River does exactly that, inviting the listener to recline in floating vessel of choice, bask in an eternally balmy sonic sun and let Scott steer them towards kinder, gentler waters.

Or, as the man himself puts it: 'The world is full of conflicts. In my day job, I see, first-hand, how confrontational people are when they don't need to be. It is hard enough getting by without raging at the world to get what you want. Peace and unity is what Jon Scott's all about and I make no apology for believing that that's the most important thing to sing about.'

Scott's musical journey began as a child in Lagos, taking in the kaleidoscopic clash of sounds that engulfed him as he walked through the Nigerian city streets. 'Its not records in stores and supermarkets like it is here. If you're walking down a Lagos street, the shops are cheek to jowl. One minute you're hearing hi-life, the next minute Frank Sinatra, The Beatles, Abba… you're hearing everything at once, including the local Afro-Beat. I was greatly influenced by Fela Kuti as a kid. I just loved the way he laid down a groove. The Afro-Beat thing was very special and unique… a man creating a whole genre for himself. But I also liked Abba's melodies. Then there's Marvin Gaye, Motown, Stevie Wonder, Quincy Jones and Michael Jackson… all the obvious suspects.'

Scott references both Gaye and Jackson on the album track and single, Give Me A Call. 'The line is: 'I've got Marvin on my iPod so let's get it on / I hear Michael on the radio and I wanna rock with you.' A couple of months before Michael Jackson died, my 16-year-old son discovered Michael. I played him The Earth Song and he thought it was just amazing. He was desperate to get tickets for the shows at the O2 and I was staying up half the night trying to buy them. So, when the news came, it was shocking.

My son and I were listening to Billie Jean a few days later and I felt the same way I did when it first came out. Even if he didn't sing a note in that song - the groove was there. That groove is what I'm talking about and what I set out to achieve.'

Flow Like A River is dedicated to Scott's earliest musical influence, the late Reverend Father James O'Connell. 'I was in boarding school in Lagos, Nigeria.

And he was the missionary priest there. Instead of having the usual boring services or Mass or whatever, he went out of his way to be interesting. He formed a choir with us.

There was a school band there at the time called Ofege who went on to be a very successful Afro-Rock band in Nigeria.

They were superstars when I was younger, and Father James had them playing in chapel with us. So, Mass would become like an evangelical concert. He then took that one step further and had us put on musicals like Jesus Christ

Superstar, Godspell and the African musical Ipi Tombi. So, every year was exciting… the musicals became an event across Lagos and the rest of the country. People would pour in in droves to see us perform. That's where my love of music and performing began. It opened up a whole different world for me. So, it seems fitting to dedicate Flow Like A River to James O'Connell's memory.' Scott was barely out of short trousers when he moved to London to study. And although he successfully granted his parents' wishes, got his law degree and started on the path to his own London law firm, music remained his first love. He spent a short time at UCLA at the age of 19 until his concerned father decided that his son might be having too much fun playing in bands in Californian nightclubs, and insisted Jon return to London to finish his studies. It was only a matter of time before Scott chose to dedicate as much time to his music as he does to overseeing his company. 'Writing songs is relatively easy. But crafting them until they reach the standard that I want is so exciting. It's wonderful. The creative process is something I can't live without.' Running a law firm, raising a family and steering a musical career - that's one Hell of a workload. 'It is. But I run my law firm in the day, record in the evening, and my family are really supportive. I'm a lucky man.'

When asked which of Flow Like A River's 10 expertly crafted vignettes he feels best represents the album, Scott surprisingly opts for a rare foray into rock noise, the rousing S2G (Stand Together). 'The song is just a call for peace and unity. I know it sounds trite, but there's too much hassle in the world, and all people need to do is step back a little and take stock. S2G is the song that best represents where I'm coming from and what I think is relevant to anyone, whoever they might be.'

With Flow Like A River fine-tuned into his most impressive musical statement to date, Scott's next move is a full tour in 2010. But, in the meantime, sink into Jon's sweet, timeless muse and find yourself refreshed and charmed by a record that is truly a labour of love. Most do this music thing to get a career in showbiz. Jon Scott doesn't have to. He does this because he has no choice. 'This music is me. I love writing songs. I love singing. I love being Jon Scott. Music's been there for me since the year dot and it will always be there. Listen to the songs and you'll understand exactly why I have to make music, no matter what else is going on in my life.'