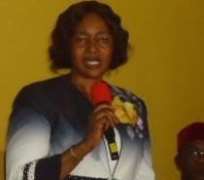 Quivering like a single lady in hammattan season, she walked into the Hallow Chamber; her face buried on her alms. She saw herself prostrating thrice before the lawmakers although she was yet to be compelled to do so. That was Barr. Mrs. Uzoamaka Ilobi, the Anambra State Commissioner for Commerce, Trade, Market and Wealth Creation recently invited for questioning for allegedly insulting the 6thAssembly of Anambra State House of Assembly.

The hot seat scenario was a replica of what transpired in 2013 between the former Commissioner of Information, Culture and Tourism, Chief Joe-Martins Uzodike, who was humbled by 5thAssembly during ex-Governor Peter Obi’s administration.

It would be recalled that the 5th Assembly led by a female Speaker, Rt. Hon. Chinwe Nwaebili summoned Chief Uzodike for allegedly accusing them of travelling with the Anambra-born Business Mogul, Dr. Ifeanyi Ubah “to eat mere rice and meat,” in the similar way the current legislators chaired by another female Speaker, Rt. Hon. Barr. Rita Maduagwu called Ilobi to order.


News48hour.com reliably gathered that Commissioner Ilobi reportedly ordered the 6th Assembly Majority Leader, Hon. Victor Jideofor Okoye out of her office, while warning him never to visit her ministry again, when the majority leader was in the ministry for oversight function.

Upon reporting the encounter to his colleagues, the Ihiala-born Commissioner was summoned to the House to clarify what she told the lawmaker who, they officially sent to her office for clarification, but she allegedly called the bluff of the House.

It was further reported that she equally ordered some journalists out of her office, when they were there to hear from her.

Angered by the development, the matter was tabled at the plenary, with the lawmakers threatening to recommend to the governor, Chief Willie Obiano, her removal from office if she failed to appear before them.

It was apparently the threat that made the commissioner to appear before the lawmakers, during which they kept her standing while dressing her down.

All the legislators who spoke during her appearance frowned at the development and warned political appointees and the public against showing disrespect to the third tier of government, which they said, was becoming rampant, and was capable of dragging their image through the mud if not checked.

Hon. Chugbo Enwezor, who spoke first, cited section 90 of 1999 constitution of the federal republic of Nigeria, even as he stressed that the boring but very unfair words spoken to them undermine the posterity and integrity of Anambra State House of Assembly, their respective constituencies and Nigerians generally.

He thereby implored the House Speaker and his colleagues to permit the Commissioner to come to the floor of the Assembly to tell them if her statements remained the same or not.

On his part, the member representing Aguata 2 Constituency, Mr. Ikem Uzoezi, who asked Ilobi if indeed she is barrister by profession, referred her to relevant constitutional provisions bleached by her utterances and behaviour.

“Are you not aware that the legislature is a constituted body empowered by the Nigerian Constitution and that any disrespect to it means violation of the law and an insult on the state?” Uzoezie equally asked.

He wondered if the commissioner forgot that the legislature confirmed her appointment, for having the effrontery to insult them, as that was the reason they summoned her to the House to call her to order.

The Commissioner, who appeared sober during the encounter, affirmed her knowledge of the law and apologized for her misbehavior before the legislature.

“I am sorry. Honestly I am very sorry. I won’t try such again,” she said shuddering and bowing.

Speaker Maduagwu and her colleagues thereby echoed; “Take a bow and go and sin no more”.

While the Commissioner came out of the plenary, news48hour.com reports that she shunned the newsmen, who positioned to interview her, then, boarded her vehicle and zoomed off.