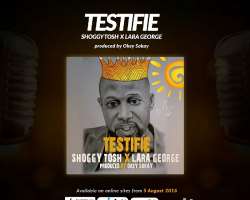 The song written and composed by Shoggy Tosh and Lara George was birthed out of the unquenchable desire Shoggy had - not only to share his testimonies with the world, but also encourage everyone to do the same.

Shoggy Tosh's rap reflects the hard times he encountered in Nigeria, the moment he came back alive after pronounced dead on campus and Lara George's velvet silky hook compliments the banging afrobeat tune all 'cooked' together by the maestro beat maker - Okey Sokay.

Music lovers can download the song from itunes, playstore, spinlet, amazon mp3 and all good online retail stores from Friday 5th August 2016 and it is available for free downloads via http://bit.ly/testifiesong from Monday 29th August. All profits from this initiative is donated to TOGO charity dedicated to raising funds for less privileged people all around the world. [Visit www.toshshoggy.com for more information on how to contribute toward this initiative].

Biography
Shoggy Tosh (born in Birmingham, United Kingdom on 9 January 1974) is a multi-award winning publisher, producer, author and television presenter mentored by Rev. Tim Omotoso. He is the founder of The Official Stars Homepage Magazine, TV & PR and also a British/Nigerian rapper. On 9 January 2014, he released his debut rap single, "emujow" featuring Shady Blue and Jamaican gospel dancehall star, Dunamis Reignz and produced by Pastorchild which topped the reverbnation 'dance' chart at #1 in London (February 2014), peaked at #2 in United Kingdom and #38 in the world. It won the best African praise/contemporary song at the 2014 PGMA London awards.

His second release, "Pamoto" featuring Henrisoul produced by Pastorchild was his breakthrough song as it racked up over 170,000 downloads, was the most downloaded gospel song on My not just ok platform in 2015, and won 5 international awards (London 2015 PGMAwards; Gathering of Africa's Best London 2015 (for positively contributing to Africa's image through music and entertainment); Akademia, Hollywood - Best Contemporary song Dec, 2015; Akademia, Hollywood - Best Music Video in Christian Dance Jan, 2016; & Afrobeat artist of the year 2016 - Gospel Xplosion Music Media Awards United Kingdom).

Shoggy Tosh is dropping his 4th single, 'PET Remix' mixed by DJ Kaykang in October, 2016 and his debut EP album, 'emujow' in January 2017.