Why "Half Of A Yellow Sun" Didn't Make It 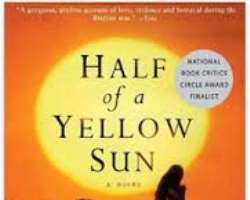 Being an English teacher all my work-life, it would be a huge shame on me if I were able to, somehow, approach the criticism of the movie, Half of a Yellow Sun, from a biased point of view. So, like my colleagues and I would normally do for essays, I will list out a couple of criteria that will be used in "marking" this movie.

Remember in secondary school, where C, O, E, MA (or whichever kind is used—we have a variety of this mark scheme) stands for Content, Organization, Expression, and Mechanical Accuracy? Well, in this case, I’ll be using PTDCP (my coinage) which stands for Premise, Theme, Dialogue, Character, and Pacing. I'm being modest here; there are over 10 criteria in the more serious international screenwriting world, and a million other points of analysis!

Let me enlighten you a bit: a lot of people do not know that a learned screenwriter can look beyond the pictures of a movie and see the script! Yes, the script! After all, Alfred Hitchcock, the Master of Suspense, has said that "to make a great movie, you need three things: the script, the script, and the script."

PREMISE:
One thing I learnt teaching English is to always give positive feedback first; so that the learner doesn't feel entirely bad about his essay. While marking, we appreciate little aspects of the essay such as the child's use of punctuation in some parts of the essay; his choice of words (even if it's just one fantastic word, we dwell on it); or if there's nothing to appreciate about the essay at all, we make comments such as "your noble intentions are appreciated, however, essay writing requires much more". This is exactly the kind of comment I would make for this movie!

Half of a Yellow Sun details the events of a civil war in Nigeria in the midst of a love story; a story about two lovers caught up in the midst of war. Fantastic! Everyone wants to watch a love story, everyone wants to see how the troubles of our environment—the real movie—affect us domestically, economically; affect our relationship, and what have you. This is definitely deep and well appreciated, thanks to the writer of the original story, Chimamanda. Honestly, this movie could have been internationally successful if this were the only requirement.

Unfortunately for this Half of a Yellow Sun crew, screenwriting requires much more.

For these aforementioned reasons, and especially because the screenwriter is not the originator of the premise, I'll give this aspect 8/10.

THEME:
I tried my best to follow through with the major messages that could be got from this movie. The more I tried to follow through, the more disappointments I got. A number of themes can be identified in this movie apart from War and it’s Effects: Love, Familial Expectations, Friendship, Wealth and Business Opportunities, Ethnic Bias, Charity, Academia, Death, and so much more. The script appears to be ambitious in its evaluation of theme, yet not encompassing in such a way that the audience feels nothing experiencing them. This, unknown to the screenwriter is very distracting especially because he always disconnects the audience from the major story when he isn't telling the major story, and almost like an attempt to tell different other almost disconnected stories. My point may not be clear at the moment; this is because I just might need to explain clearly what I mean with how the characters of the movie are portrayed.

If your audience is placed in a situation whereby they have to make the effort to meet you half way in your story-telling, then you're getting some things wrong. 4/10

CHARACTERS:
I could write a 10-page essay on why all the characters in this movie do not work! One major reason is how flat they are. They are the same from the beginning to the end. Their reactions to certain situations are expected, and so there isn't any element of surprise in the nature of the characters. They start off all nice and noble, continue, and end the same way. There are instances in the movie where I hoped they would change: take charge, recluse, rebel, create some tension for us, make us wait for the unexpected, but that never happens. The characters are nothing but pawns in the story; helplessly hopped around on the chess board, and not actively doing anything to change the world they live in. And this includes the major characters.

Oh, wait! I see what happened here. The movie crew probably thought that if Hollywood stars played the major roles in the movie, everyone would be mesmerized, and no one would notice just how weak the characters really are. Majority of Nigerians who applaud this movie could be fooled, but I couldn't, and certainly not the international world!

There's a screenwriting trick to helping you get your characters take charge and do more, and it's as simple as creating conflict in every scene. A screenplay has basically 40-70 scenes, and something pushy must happen in every of those scenes. These things would naturally form the base of your THEME (see above)—but nothing ever really happens in this script. The characters walk around as though they are a surprise bomb (which never explodes); like they are having the audience experience some sort of suspense, but really, they are, in fact, plain annoying, and that's because they don’t have enough substance to enable us care about them. Take a look at the dirty maid Odenigbo had to sleep with, for instance—from where to where?! The audience feels more surprised and disgusted (seems good, but isn't, given the circumstance) in Odenigbo than solely disappointed; such behavior was never hinted in his character from the start, and the Mom didn't seem quite convincing either. Maybe the maid should have been portrayed as truly tempting, you know, like a video vixen. That would have worked, but guess what, that would have changed the whole story as well, which to me would have been a better choice; a screenwriter doesn't have to reproduce the novel's characters verbatim; there is what is called creative license, A.K.A. tweaking. Come on, Biyi, Chimamanda has more space to create tension with such character in her novel than you do with your screenplay!

Not to forget, at some point in the movie, it appears the audience are waiting for something to happen till finally the explosion occurs at the wedding, which no character is responsible for—why the hell not? Then there is a dramatic display of Olanna caring about some lecturer friend we only met once, and who never said anything worthwhile. An explosion kills him and the audience is expected to care with Olanna?!

To crown it all, what movie doesn't have an antagonist? I'm not even sure I met any of the villains apart from my darling Hakeem Kae-Kazim (Captain Dutse) whose character was distastefully under-developed, and unfairly allowed to be hated by the audience. Some villains can be loved by the audience too! Did you know? I'll just stop here. 2/10

DIALOGUE:
This screenplay makes all the mistakes a script could possibly make in the aspect of dialogue. Even though there are a few memorable lines; these lines feel like perfect lines poached from the novel, or maybe, just maybe, the stubborn decision of the Hollywood actors in the movie to switch things up a bit. One of such lines would be when Odenigbo says "I'm too old to die young from smoking", maybe Biyi Bandele wrote this himself, maybe not. But I'll settle with not, going by the majority of dialogue lines that exist in the movie that aren't in the same category as this.

However, the message in the dialogue of this script is always acceptable in terms of grammatical or stylistic correctness. But I guess we have to give this credit to the actors.

Most times in this movie, though, as with all our Nollywood movies, the dialogue's too on-the-nose: too precise, saying things that are too straightforward, too explicit, or more regrettably repeating the same information again and again; letting us know so many times that the war is between two tribes; or Odenigbo's mother continually asking for a kid and quoting traditions the audience already has a lead on. The worst mistake a screenwriter can make is saying what the audience already knows!

Except it's going to be ambiguous, dialogue in movies should have, embedded in them, connotations with a plethora of meanings that just blows the mind of the audience either in a humorous or in a thought provoking manner.

The dialogue in this movie is a sure sign that Biyi is a pure playwright and nothing more. It is only in a play that you need to say things over and over again; maybe because of the stage set up— to avoid confusion. However, in this script, it appears the dialogue exists to take up some time, and lengthen the movie like how it's done in a play script. When in actual fact, more action and story beats would have helped this screenplay. Or better still, punchier, quotable lines.

At some point, the script gets obsessed with making use of talking heads; people sitting around talking, with no associating action. Boring! The dialogue most times are long—quite understandably for a first draft—but that's why it's a first draft: the first of the other rewrites that need to be written. The dialogues could have, instead, been rewritten to achieve the "lean and mean" mantra of international screenwriting in subsequent drafts.

It is important to keep in mind that the international world is a hungry place, and movies are a learning ground; people learn to talk pretty from movies, and replicating what happens in real life in a movie dialogue isn't going to give one that privilege of having one's lines adopted, and when people don't remember one's lines, they don't remember one! 5/10.

PACING:
This is the most overlooked aspect of film making/screenwriting in Nollywood, and I'll show you how. Firstly, have you noticed how those block buster movies in Hollywood has your heart racing with expectations at as early as 15 minutes? You already have been introduced to all the major characters and situations have already been established by 20 mins. This tempo carries on till the end of the movie, and you can't believe you just finished watching a 2-hour movie in what felt like 45 minutes. That's pacing. It basically means not wasting time, going straight to the point, being mean, finishing it off, getting in as late as possible and leaving as early as possible, and what have you.

Yes, half of a Yellow Sun does that with the first 10 minutes, kinda, which makes us continue watching the movie with great hopes and with an open mind, before things stop happening, and the pacing drops till the movie ends.

There's a process of writing movies to be fast paced. There are rules. It might not make much sense here because we are looking at the movie, and not the script. But take it from me, executing pacing is easy peasy. 4/10.

Five criteria. One screenwriter. Other screenwriters may have more to say with other criteria (I intentionally left out "Plot" because I didn't want to score this movie any lower), but I guess this should be more than enough to help us understand why Half of a Yellow Sun didn't stand a chance at the international level. 23/50