Music has always been part of me — Celestine Babayaro 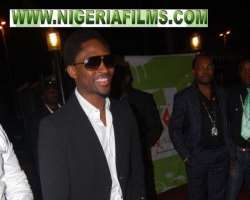 Emmanuel Babayaro came to limelight through football before he delved into music and movie. In a brief chat with ADA DIKE, he talks about his career and other interesting issues.

Did you go into music because you have stopped playing football?

Music has always been part of me, even before I started playing football. I mean people got to know me more as a footballer; so, I would say I gained my fame from football. God bless football first. As soon as I stopped playing football, I had to keep doing what I love, which are music and acting.

But football made you...

(Cuts in) It is the will of God. Who am I to question Him? You have to understand that there comes a time that one has to stop playing football. I am still into football because I have a football club and an academy known as “Pioneers” in Kaduna. Right now, I have moved professionally into music and acting.

How have you been faring since you went into these creative endeavours?

Right now, my music is dominating the air-waves in Nigeria. My second single, which is about three months old, is called “Naija Areas.” I have done its video and it is everywhere. That is why I keep getting invitations to play at events on a regular basis.

Where does your inspiration to compose music come from?

It is from God. If something is your talent, it will keep coming.

What do you miss most now that you have stopped playing football?

The only thing I miss in football is money (laughs). No, I am just joking. Basically, I don't think I miss anything because I have achieved all I wanted to achieve as a football player.

I have acted and produced three movies and I acted in one which was not my production. One of my movies, “Growing Up”, has been nominated for an Award. Others are: “You are my Sunshine,” Taking Chances” and” Fantastic.”

Let's talk about your marriage...

No, I don't talk about my marriage.

What's your message to your fans?

My message to the youths is:

Let your voice be your voice. Be patient, be resilient, be God-fearing and be disciplined. The world is yours.