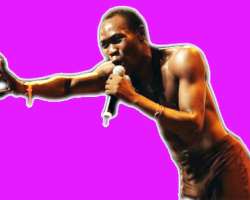 The show, which holds almost regularly at the same venue has come to further stamp Seun as a true representative of his late father Fela, kicks off at 10pm.

But next week, Afro beat followers will miss their darling as arrangements have been made for him to perform with the Egypt 80 Band at D' Yard', a new celebrity hangout recently opened at Lawanson Bus Stop as part of activities to celebrate May Day on Saturday.

Seun Kuti, who recently performed at the Lagos Black Heritage Festival, will thrill the audience with new tracks from his yet to be released second album.

As usual, Seun assured Afro Beat fans that there will be plenty of yabis and gbedus for every one.

“ All they need do is come have fun as usual”, Seun told Showtime during the week