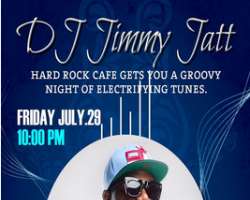 Come enjoy some of the best music in town with Veteran deejay, DJ Jimmy Jatt at Hard Rock Cafe Lagos on Friday the 29th ofJuly 2016.

Get your dancing shoes and groove to the thrilling beats this weekend, doors open at 10:00PM

For Enquiries please contact: 09081988888
About Hard Rock International
With venues in 68 countries, including 163 cafes, 23 hotels and 11 casinos, Hard Rock International (HRI) is one of the most globally recognized companies. Beginning with an Eric Clapton guitar, Hard Rock owns the world's greatest collection of music memorabilia, which is displayed at its locations around the globe. Hard Rock is also known for its collectible fashion and music-related merchandise, Hard Rock Live performance venues and an award-winning website. HRI owns the global trademark for all Hard Rock brands.

BECAUSE YOU'RE BUZZ WORTHY