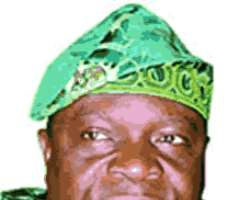 Last week, Oyinlola's request was granted by the state House of Assembly. The legislators directed the governor to ensure that the projects are handled by certified and credible contractors.

A few days before, the governor had, at a forum with journalists, extensively outlined reasons why his administration needed to obtain the loan which he said was first mooted by the Speaker of the House of Assembly, Hon Adejare Bello, at the presentation of the 2010 budget. Oyinlola also stated that his request for the bank facility had the approval of the Central Bank of Nigeria.

Downturn
Oyinlola asserted that his administration has, since its inauguration, embarked on numerous projects that promote the welfare of Osun residents. He noted, however, that the state finances were negatively affected by the global economic meltdown which ensured that the 2009 budget recorded less than 60 per cent performance.

'The effect of the economic meltdown has been bitterly felt in Osun State due mainly to some factors which include servicing of inherited external debt, high salary and pension figures and the poor industrial base of the state which has not made internally generated revenue of the state to appreciably increase,' the governor said.

Old burden, fresh questions
He explained that five of the major loans being serviced in the state were taken by the government of the old Oyo State in the Second Republic. That government, he recalled, was headed by the late Chief Bola Ige. National Chairman of Action Congress and Prince Oyinlola's predecessor, Chief Bisi Akande, was Ige's deputy.

He continued: 'We have five of such loans taken in 1980, 1982 and 1983 by the Second Republic civilian government of old Oyo State headed by Chiefs Bola Ige and Bisi Akande to construct water schemes for Osogbo/Ede, Ejigbo and Ilesa as well as for rural electrification projects. With the creation of Osun State in 1991, the debts got transferred to our state because the communities meant to be served by the water schemes fell within Osun State. Fifty percent of the loan value on rural electrification projects was also shared out to Osun State in 1991.

'It should interest every patriot in this state that our state for the past decades has continued to pay and service these debts. Our own administration has, so far, since June 2003 paid N4,724,247,691.63 in service of the debts incurred on the unexecuted Ejigbo and Ilesa water schemes as well as on the Osogbo/Ede water scheme and rural electrification projects.'

Oyinlola regretted that the loans have set the state back severally. 'In 2008 when the federal government released special funds from the excess crude account to states, Osun State got nothing on account of these second republic loans. One of our neighbouring states got about N14 billion. Again, in February this year, our state was to get N1.7 billion from the excess crude account but because of these loans, we got only half of that amount with the balance going for loan repayment. The same happened in March. I want the AC and its friends to ask questions about these strange 28-year old loans, especially the one on the unexecuted Ejigbo and Ilesa water schemes which appear to have become an eternal albatross on the neck of our state.

'It is particularly painful that apart from the fact that the water schemes in Ilesa and Ejigbo were never executed, the $10 million loan taken in 1982 got bloated to over $36 million by year 2006 when Nigeria exited the Paris Club. The combined effects of servicing these loans have qualified Osun State as one of the three debtor states in Nigeria apart from the federal government.'

The governor noted that outstanding balance for some of the loans have grown higher than the actual amount collected because such loans were never serviced for decades. He also informed his audience that revenue accruing to the state has dwindled in recent times, but stated that no dwindling has occurred in the salaries and allowances of the state civil servants.

The governor insisted that but for the occasional release of funds from the excess crude accounts as well as the internally generated revenue, execution of projects in the state would have ground to a total halt.

'We came to right the wrongs of the past and would not on the account of the downturn in the economic fortune of the state shirk our responsibilities both to the people and to the workforce. We will continue to pay salaries and allowances, including providing running costs as well as settle pensions and gratuities of our senior citizens. However, government will continue to execute projects too. The ordinary people who earn no salary from government must feel the impact of government through provision of amenities and rendering of quality services.'

Oyinlola explained that his government would spend the bank facility on a number of projects, including a seven-storey liaison office in Abuja. Six of the floors would be let out while one would be used by the state, he said, noting that the project would actually pay back whatever is spent on it. He also defended his administration's decision to build a state hotel and lampooned the AC for labelling the project unnecessary.

'May I ask the AC what it thinks of the decision of the Awolowo government to build the Premier Hotel, Ibadan, Lafia Hotel, Apata, Ibadan and the Lagos Airport Hotels? If Awo were as myopic as these AC people, would he have left these landmark assets,' he queried. He also gave reasons why the other projects listed along the bank facility had to be urgently embarked upon. Road projects in several parts of the state, the construction of stadia in some zones in the state, provision of an Outside Broadcast Van for the state television service and other projects to be financed by the loan are very germane to the development of the state, Oyinlola said. He also clarified that there is currently no World Bank project going on in Osun State.

Oyinlola informed his audience that his administration is urgently seeking a way out of the state's huge debt burden, explaining that senior government officials had travelled to the United States to meet with the creditors.