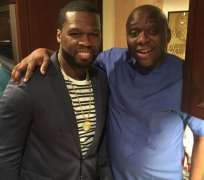 It is quite amazing to spot Nigeria\'s bigwig and the CEO of Zinni Media Concept, Chief Prince Donatus Okonkwo with America\'s famous artist 50Cent together recently. ‎The outspoken Nigerian business man who has exclusive franchise for Miss Intercontinental world and The CEO for all 54 Countries in Africa ‎is said to be sealing deals with the award winning super star, haven floated a record label recently. He is also the current Owner of the most Famous EFFEN VODKA in Nigeria now Life time partner to 360 years world Largest Distillery company Beam Suntory and 50 cents

‎
‎Besides the entertainment cycle of Donatus Okonkwo, he is also the chief executive officer of Tetrazzini Quick Service Restaurant (QSR) with a background anchored on solid entrepreneurship. While growing in the commercial city of Aba, Okonkwo developed passion for business at a very tender age. As an adult, he held on to that dream. Consequently, upon returning from United Kingdom where he bagged his first degree and also worked as a casual worker with MacDonald restaurants, the businessman in him received a boost.

His new stomach infrastructure in Victoria Island \' Hotspot Restaurant\' is already bedhived of activities and patronage of different diets of African and intercontinental dishes. Zinni Media concept will be hosting the winners of Most Beautiful Model in Nigeria to a grand reception at the Resturant on 30th July, 2016.

It would be recalled that he was recently in‎ the Palace of Ooni Of Ife in company of Sonia, popular actor\'s Colombian wife Ike Ogbonna to seal a mega deal in the state.‎