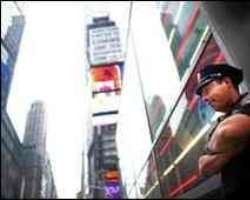 US investigators have arrested a suspect in an attempted car bomb attack in New York City, police sources say.

The arrest follows reports that police had discovered the identity of a man who bought the car used in the plot.

The vehicle was left in New York's Times Square on Saturday with a bomb made from fertiliser, fireworks, petrol and propane gas tanks.

The bomb was discovered and dismantled before it could explode.