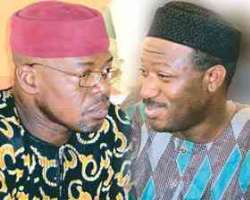 This is contained in a judgment notice dated May 3, 2010, and served on petitioners and the respondents on the same day. The five-line notice was signed by the secretary to the tribunal.

The verdict will be delivered exactly a year after the last batch of the supplementary governorship poll was conducted in Oye Local Government Area of the state.

While the first segment of the rerun election was conducted on April 25, 2009, the second part in Oye could not hold until May 5 due to violence.

The notice served on petitioners and respondents through their lawyers reads, 'Take notice that the above mentioned petition has been listed for judgment on Wednesday May 5, 2010 at Court No 1, Ado-Ekiti, at the hour of 9:00am. Dated this 3rd day of May, 2010.'

The Director of Communications and Strategy of the AC, Mr. Yemi Adaramodu, confirmed that the party and its governorship candidate had been served with the judgment notice.

Adaramodu's counterpart in the Peoples Democratic Party, Mr. Jackson Adebayo, also confirmed in a telephone interview with our correspondent that the judgment would be delivered on Wednesday.

Confirming the date, the Police Public Relations Officer, Ekiti State Command, Mr. Mohammed Jimoh, told our correspondent on the telephone that the police were ready for the judgment.

Our correspondent also observed that armoured personnel carriers and trucks loaded with riot policemen had started patrolling the streets of Ado-Ekiti, the state capital.

The police APCs and trucks rode slowly through streets, as armed riot policemen inside them chanted various songs.

The PPRO urged members of the public not to panic, as over 6,000 policemen had been deployed in various parts of the state to ensure that there was no breakdown of law and order before, during and after the verdict.

He said, 'We are ready for the judgment. We have deployed over 6,000 policemen for the exercise; there is no cause for alarm. We have intensified operation stop-and-search. This is just to make sure that we prevent the importation of arms and hoodlums into the state.'

The PPRO, who expressed confidence that the state would not witness fresh violence, said that the leadership of the PDP, AC and Labour Party had assured the police of peaceful behaviour.