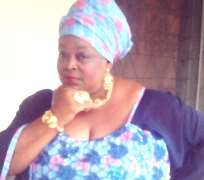 Still in pains and shock, Veteran Nollywood actor, Jide Kosoko, has announced the burial plans for his late wife, Henrietta Kosoko, who died at a hospital in Abeokuta, Ogun state on Monday June 6th, after a prolonged battle with Diabetes.

Late Mrs. Kosoko would be laid to rest on Friday June 10th, this was announced by Jide Kosoko in a statement he released today.

It reads, "With heavy heart, I hereby officially announce the death of my wife, Henrietta kosoko. It happened at about 10:30 am on Monday 6th of June, 2016 at Al-jolad hospital. There will be a christian wake -keep and artiste performances on Thursday 9th of June , 2016 from 4 pm to 9 pm. At Ltv 8, Agidingbi ikeja. The Burial service at the Catholic Church, and interment follows at Atan cementry for Friday 10th of June 2016"