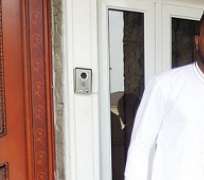 Joseph Yobo and his wife, Adaeze took their kids out, all dressed in a cool attire. Who said that having a lovely family isn't pretty? Since, Yobo wrapped his football career in style with a Testimonial Match at the Adokiye Amiesimaka stadium in Port Harcourt last month, a lot of good things have been happening around him.

He has been given a chieftaincy title in his village and also, the Rivers State governor Nyesom Wike, has appointed him as Senior Special Assistant on Sports Development to the governor. He had some triumphant moments and some downs as well during his career.

He was one of the most consistent players in the whole Premiership which made him one of the seven players who appeared every minute of the 2006/07 season.

How do they look in this picture?