Ketchup Shuts Down Lagos On One Nite LIVE 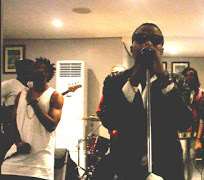 The King of dancehall, Ketchup, stages a comeback after his Sky Boarding incident in Dubai by Headlining this month's ONE NITE LIVE event held at the Lotus Pataya restaurant in Lagos.

The power packed live band performance was spell binding as Ketchup delivered a medley of all his tracks in an outstanding performance alongside The One Sound Band.

Ketchup in his show of appreciation also revealed that he's back and better and his fans should expect nothing but the best from him this new year.