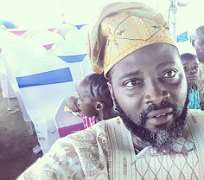 Popular beat maker, Puffy Tee, who recently returned to Nigeria after a long hiatus, has not been relenting in getting his grounds back in the Nigerian music industry after producing some hit songs with most popular Olu Maintain's 'Yahoozee,' and many others.

Still good in his craft on his return, Puffy Tee seems not to have time for himself as he has been busy in the studio with several artistes waiting for him to produce some quality sounds for them. But something important has dragged him out of the studio.

Puffy Tee, had to play the fatherly role for his younger sister who recently got married to his long time lover, Salami.

The wedding which took place in Asese area of Ogun state, saw Puffy Tee first time in Agbada which looks so fitting for him as he represents his father at the sister's traditional marriage.