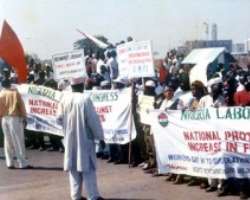 FOLLOWING last Wednesday's partial deregulation of the downstream sector of Petroleum industry by the Federal Government with an increase in pump price of petrol from N86.50 to N145, the organised labour and their civil society allies have resolved to lead Nigerian workers on strike after  Wednesday, May 18. Saturday Vanguard gathered that labour leaders will send a letter to government latest tomorrow demanding a total reversal to the N86.50 pump price of petrol before 12 am on Wednesday, failing which all installations will be shut down thereafter. NLC during one of its struggles against deregulation The industrial unions have said between Monday and Tuesday, they will mobilize members for a nationwide total strike, and therefore urged Nigerians to prepare for the industrial action by stockpiling food items and other essential things they may need during the duration of the strike. Information available to Saturday Vanguard had it that while leaders of Ayuba Wabba faction of the Nigeria Labour Congress, NLC, will meet with their Trade Union Congress of Nigeria ,TUC, counterparts today in Abuja alongside some civil society groups to harmonize positions on how to go about the planned action, the Joe Ajaero led NLC will also meet today in Lagos with some civil society groups to take position. Saturday Vanguard gathered that though the National Executive Council, NEC, meetings of Ayuba Wabba faction of NLC was very stormy as labour leaders from the north were foot-dragging over the planned strike, labour leaders from the South west, South-South and South-East, insisted on fighting the government to a stand still over the hike. After much pressure, it was gathered that labour leaders from the north agreed to give the planned strike their total support. It was then resolved that a letter be sent to government between today and tomorrow on the resolve of labour and their civil society allies and that industrial unions should mobilize their members between Monday and Tuesday for a total strike that could commence on  or after Wednesday. Meanwhile, TUC on its part, at its NEC meeting gave government till Wednesday to invite labour leaders to find a way forward to avoid a total shut down of the country. However it is expected that at today's meeting between TUC and Wabba faction of NLC, both positions would be harmonized for the action to begin on Wednesday. Addressing journalists after its NEC meeting, yesterday in Lagos, TUC President, Mr. Bobboi Kaigama, said the body was giving the Federal Government till May 18, to invite labour leaders to discuss the way forward to avoid nationwide strike. “'The NEC in session has given the government till Wednesday 18, to invite the leadership of labour for discussion aimed at determining the appropriate way forward,''Kaigama said, According to him, the leadership of TUC would interface with the Nigeria Labour Congress (NLC) and the Civil Society Allies to work out plans that would be put in place to protest the increase in  fuel price if the government fails to meet the Wednesday deadline. Similarly, the Ajaero led faction of NLC which had earlier given indication that members would join forces with other bodies and Nigerians to fight the hike, would meet today and also take a position. Ajaero told Saturday Vanguard that as pro-people group, it would always stand by the people to find out how to lessen their pains. NUPENG, PENGASSAN back subsidy removal, call for further dialogue on new fuel price Meanwhile, the Joint National Executive Council(NEC) of The Nigeria Union of Petroleum and Natural Gas Workers (NUPENG) and Petroleum and Natural Gas Senior Staff Association (PENGASSAN) Friday threw its weight behind the subsidy removal but warned that steps must  immediately be  taken   to review the minimum wage and  for proceeds  from the sector to be used effectively and judiciously  for development. The President of NUPENG, Comrade Igwe Achese who stated this Friday  while briefing newsmen in Calabar  during the joint NEC meeting of  NUPENG/PENGASAN  said  government must immediately put in place mechanisms to review the minimum wage adding that there must be  palliative measures  to cushion the effects of subsidy removal and deregulation of the oil sector. According  to Achese,  they had expected government to deregulate the sector for more than eight years now but government had always dragged their feet. In his words:”The deregulation of the oil sector and opening of the market is a welcome development, we must deregulate the oil and gas sector. There must be transparency.  We must stop paying subsidy into the hands of few Nigerians who are mortgaging this country and that must stop, when the issue was raised in 2012 it was politicized, we  must not mortgage the nations economy “he stated. On the current price he stated that “The issue of pricing is a secondary issue but the most important thing is that government has come up with a firm plan to stop the payment of funds to the hands of a few” “we must open up the system and see how we can now talk about regulation, the key issues of price modulation is regulation as well as putting in place the necessary checks and balances that can control  the price environment” he said. “We are (NUPENG and PENGASSAN) a centre, we have also requested  that if the price is too high we are going to react, we are going to ask for a platform where we will sit down and talk about the possible best price that can take this nation forward, but for now our's is that it is  welcome by both union that the sector is deregulated and that subsidy is being removed”. On his part the Preident of PENGASSAN ,Comrade  Olabode Johnson said they were not in support of import driven petroleum subsidy. In his words:”we are against import driven subsidy of petroleum products,our refineries must work, the most important thing that will make Nigerians key into what government is doing is to have  affordability and availability.