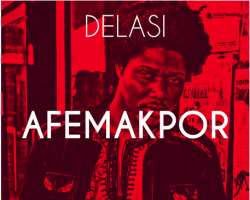 Delasi made waves late last year with his debut album, “''#ThoughtJourney” His soulful positive introspections and earnest singing are complimented with a mix of jazzy boom-bap, sophisticated pop, and traditional African samples ---Mixologi

Fast forward some months into 2016, the Ghanaian artist is up to a lot in his motherland and wherever music takes him. While in Kenya, he collaborated with some dope artists and producers. Today we are happy to share with you a hot banging remix from the talented Kenyan producer Jinku who's ''Amadeyo' EP (Released via Sofa Lounge Records) made rounds on the internet on prestigious blogs like The Fader.

''To be honest I really struggled with this song, and I had almost given up. The original had this really great African sample and without that, I really wondered what I could create. So I tried to recreate that using Delasi's own vocals.

I don't know the context of the song, to me it felt like a love song that was trapped in a tribal beat. I just wanted it to be sensual and Delasi's words to be felt more than the beat, so I gave the song more space. I just imagined I was scoring an intimate dance scene between two star crossed lovers''-Jinku.