I wish President Buhari was from the ghetto- Freeze 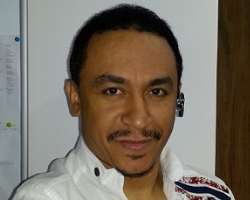 Since British Prime Minister David Cameron told the whole world that Nigeria is really corrupt, a lot of people have come for him especially radio personality Freeze, who is not happy that Buhari is not a strong headed president who can beat up Cameron in London.

He started with a letter that is hilarious "Dear David, when you get to hell, help me greet your fantastically corrupt dad! I can't believe that you, a man whose father was implicated in the Panama papers saga and this same you were asked by the opposition to resign because you owned shares in the alleged company that was involved, are now calling Nigeria corrupt?”

He went biblical "John 8:7 KJV [7] So when they continued asking him, he lifted up himself, and said unto them, He that is without sin among you, let him first cast a stone at her. The qualification required to call someone corrupt, is to be absolutely corruption free yourself.”

To Buhari, he said "I wish my president was from the ghetto so he could bitch slap your punk ass and turn you bright pink. But then again...He wouldn't want to stain his palms."