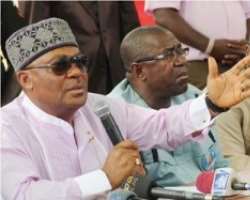 Rivers state chapter of the All Progressives Congress (APC) has alleged that the governor of the state, Nylson Wike, is presently running a parallel country of his own contrary to the law of Nigeria.

The state chairman of the party, Dr. Davies Ibiamu Ikanya, told newsmen in Abuja at the national Secretariat of APC that the governor does not obey any part of the Constitution of the land.

“I can give you instances; first and foremost, this is a man that has his own army that is free to kill and then all he does is go to call AIT and he would give reasons why he should kill. This is somebody that has actually threatened anybody that wants to conduct elections in Rivers state to write his will. We lost a youth corper, some soldiers were killed, an State Security Services (SSS) operative was killed.

“Two days ago, Dr. Vincent Elvin Eebee was killed in Bori and this is where Nyemsom Wike has blackmailed soldiers not to carryout their constitutional duty of taking away arms from criminals. We are aware also that the office of our Senator, Senator Magnus Abe was brought down by bombs planted by hoodlums in that area.”

While reacting to the recent election in Rivers state which was declared inconclusive by the INEC, the APC chairman said: “It was very sad that the election could go the way it went in Rivers State. You can see an election concluded and five days after, the result would be announced and some other results are not announced. Wherever APC won, there was no announcement, wherever PDP maneuvered, it was announced.

“It is very very sad, even an election where the officer was asked to announce PDP at gunpoint and it was on social media everything, that result was still announced. The day that the INEC electoral Commissioner was giving certificate to those PDP people, he told them, none of you won any election, but because INEC is not a court, we have to give them the certificate.

“It is so pathetic that we would have a state in a country that would be completely lawless. It would interest you to know that we have also complained to the Inspector-General of Police, who said to us that he has given clear orders that the police should be professionals, but that order is not been obeyed in the state.”