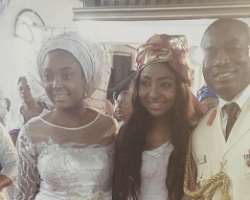 Recently, Nollywood actress, Belinda Effah, bid her father farewell to mother earth as he was being laid to rest in his home town in Calabar, Cross-River state.

The actress was not left to carry the burden alone as friends and some Nollywood colleagues also came to show her support.

Though it was recently rumoured that the actress has put to bed secretly in the US but all through the burial process, there was no trace of the actress with a baby or anyone calling her to come and breast feed her child.

At some point, she was seen weeping while sometimes she was busy playing and thanking people who came around to support the family.