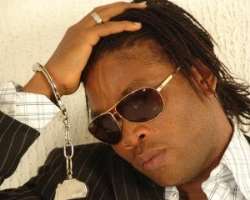 The name African china does ring a bell, as the artiste has enjoyed massive recognition with his then type of music.

Retaining relevance, years after, new talented artiste springs up, has being a big challenge for many artistes and only few were successful in maintaining their position in the industry.

The singer disappeared from the industry for a while, but claimed to have gone into sound equipment during that period.

In a recent interview with The View, he revealed that he wouldn't disappoint his greatest fan, his dad, who happens to be a fan of legendary Fela by doing any type of song that wouldn't make his dad happy.

He went to say, age of artiste should be properly investigated by NBC before being allowed into the entertainment industry.

He wrote: “I can't do just any music, because my father was a fan of Fela. And being my greatest fan presently, I can't just release any song. I have to do something that my father will value for life. Back then, we sit down and take time to write our lyrics. We just don't go into the studio, expecting the words to just form; Nigerian Broadcasting Corporation (NBC) should look into the age bracket of artistes, before they are allowed into the music business.”