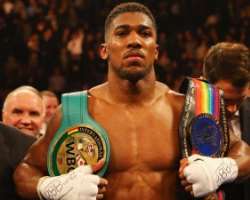 The bout which took place at the 02 Arena in  London saw a more confident Joshua snatching the heavy weight title at the second round after stunning the former champion.

Joshua was on the front foot from the beginning and had Martin rattled in just the first round.

The 26-year-old then caught Martin with a counter right hand, sending him crashing to the canvas, before landing another big right for a knockout win.

Champion Martin, who was making the first defence of the title he won in January, entered the ring wearing a tall crown, a fur-trimmed, velvet cape and a smile. But the smile soon disappeared.

Some thought previously unbeaten Martin, 29, would trouble Joshua with his southpaw stance – he was the first left-hander Joshua had faced in the paid ranks – but he barely threw a punch in anger.

Joshua, who won gold for England at the 2012 Olympics , says he still has plenty left to achieve.

“It's only a quarter of the way there. I'm not going to get carried away because there are still things to be done. I'm going to go back to the changing room and do some pads,” he said.

“There'll probably be some negativity about Charles Martin but a few days ago he was this big dangerous southpaw.

“He was willing and brave enough to come to the lion's den and that says a lot about Charles Martin. Big respect.”