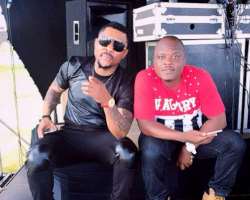 Oritsefemi started it all when he gave Rayce a day to pull down his label from his work. There was no need for Rayce, who is caught in between this bitter war to reply Oritsefemi because Danku, the former business partner, of Oritsefemi is his manager.

Danku has responded but as a splitting viper who has forced Oritsefemi to delete his initial rant and threat on the social media when he called him Lucifer. The two men are struggling ownership of MSN Gang.

Oristefemi had initially claimed to own MSN Gang, when he presented documents which did not have Danku's name on it. Danku has replied and still claims he owns MSN Gang.

See the hilarious comment from Danku "Hmmm. Lucifer please respect yourself and be true to yourself." Making it more personal "MSN Gang belongs to me. Stop threatening my artiste..."