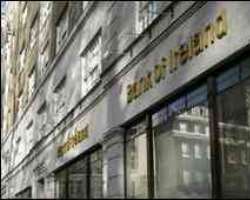 Bank of Ireland has announced plans to raise 3.4bn euros (£2.9bn; $4.5bn) in order to help its recovery from the financial crisis.

The Irish Republic's biggest lender said it would raise up to 1.9bn euros through a rights issue.

The bank hopes to raise the rest of the money by placing shares with institutional investors, and through a debt-for-equity swap.

Bank of Ireland was told to raise 2.7bn euros by financial regulators in March.

The move is the latest stage in the recovery of the Republic's banking sector following a government bail-out in the wake of the global financial crisis.

Irish lenders were hit hard by the collapse in the property market, which saw billions of euros-worth of home loans go bad.

Last month, the government announced plans to inject more money into the banking system in order to further stabilise it, but no new government money was planned for Bank of Ireland.

It is currently 16% government-owned, and was asked to raise cash privately to meet new capital requirements.

It also needs compensate for losses on its bad loans that have since been transferred to the state-run “bad bank” – the National Asset Management Agency.

The bank's cash raising plans also involve a possible change to the government's stake in the bank.

Bank of Ireland plans to convert some of the government's preference shares – which give it certain privileges over ordinary shareholders – into ordinary stock.

That is expected to see the government's stake increase to up to 36.5%.