I Use an Old Bible, God Opens The Window of Heaven for me…Vincent Eyeama’s Epic Reply 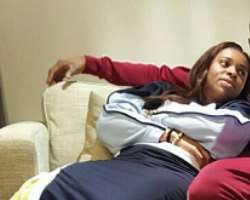 Former Super Eagles Goalie, Vincent Eyeama, for the first time has joined the league of Nigerian celebs who already have prepared answers for any form of cyber bully they get on social media.

Recently, the player shared a picture of himself with his wife relaxing while his Bible and his laptop were on the table and behold, a critique came strolling on him as he pointed to the player that he has acquired lots of new property but still using an old Bible.

According to the fan, “that Bible looks old enough but the laptop new,” Eyeama, who laughed over the statement immediately, served him hot and fresh by reminding him “that shows the hidden truth of my success. I work hard with my Bible and the window of Heaven pours down new computers.”

He also noted that “The older the better. My brother, I prefer this old one that I am using than the brand new one that will be in the book stand.”